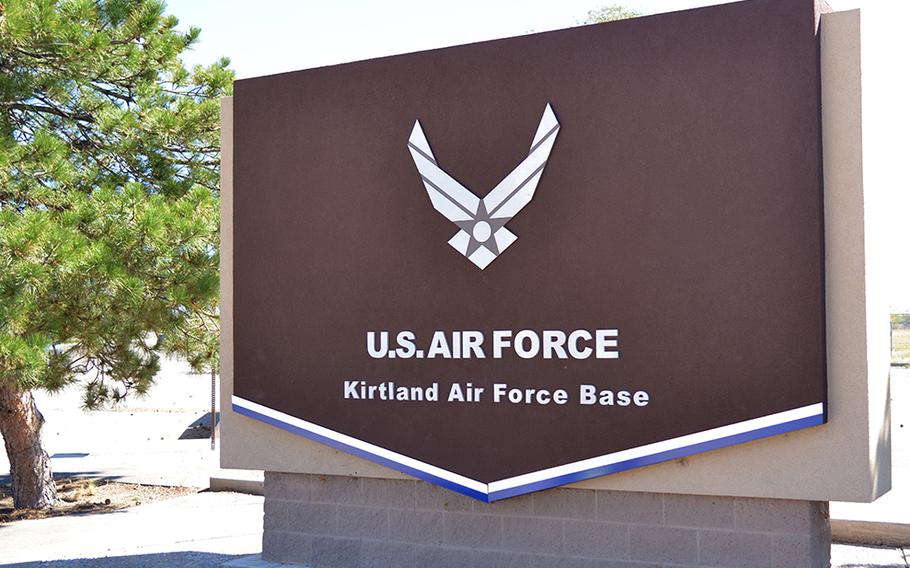 The new facility, expected to open in fall 2022, will be the first industrial tenant to set up shop at a planned 70-acre mixed-use site known as MaxQ, which is currently under development on Kirtland property along the south side of Gibson between Carlisle and Truman.

BlueHalo will relocate most of its 260 existing Albuquerque employees from other sites to the new location, while also hiring an additional 64 people to work there, the company said.

The new investment, combined with BlueHalo’s existing operations here, could generate $3.2 billion in total economic impact on the local economy over the next 10 years, said Gov. Michelle Lujan Grisham, who celebrated the announcement in a news conference Tuesday with Albuquerque Mayor Tim Keller and company executives.

“This is all about the state and private sector working together in productive partnerships to create new economic opportunities,” Lujan Grisham told event participants. “… It means high-paying jobs with average salaries of $90,000.”

“This is not just about one company’s announcement,” Keller said. “We’re getting the word out that we are the home for space technology around the world.”

Indeed, BlueHalo is one of many high-tech engineering companies expanding operations in Albuquerque to tap into the emerging space industry here, generated in large part by U.S. Department of Defense efforts to modernize the military’s space technology. Those efforts are heavily concentrated at Kirtland, which houses some key space-related agencies, such as the Space & Missiles Center and the Air Force Research Laboratory’s Space Vehicles Directorate.

And, with the DOD now largely relying on private industry to build new components and systems for space, more companies are winning military contracts here to work with Kirtland-based entities.

“The ecosystem we have created, both inside and outside the fence line at Kirtland Air Force Base, has become the ideal location for leading innovators like BlueHalo to put down roots,” Heinrich said.

In fact, MaxQ — the mixed-use development where BlueHalo will establish its manufacturing hub — is aimed at attracting a lot more high-tech companies to set up shop at Kirtland. Thunderbird Kirtland Development LLC signed a lease with the U.S. Air Force last fall to build out MaxQ as a sprawling office, laboratory and retail complex that could eventually encompass more than 2 million square feet of mixed-use space.

Thunderbird expects to break ground on the first phase of the project next month, said Kevin Yearout, a member of the MaxQ development team.

“We are excited to have BlueHalo as an anchor of the MaxQ property, they are the exact type and quality of tenant we envisioned when we began planning MaxQ at Kirtland,” Yearout said in a prepared statement. “… This is an indication that the local ecosystem of technology development in defense and space-related industries is quite healthy.”

Another, much larger space-related complex called the Orion Center may also be developed just west of MaxQ. That project, headed by the Washington, D.C.-based Theia Group, plans to build a 4.1 million-square-foot satellite manufacturing complex on a 114.5-acre parcel of land next to the Albuquerque International Sunport. If the project moves forward, the company expects to employ at least 1,000 people to start.

For its part, BlueHalo has been investing heavily in its Albuquerque operations since last fall, when it acquired the homegrown engineering firm Applied Technology Associates for an undisclosed price. In early July, it also announced the acquisition of Albuquerque-based Development Engineering Services Corp., which designs and builds electronics systems for space.

BlueHalo is currently housed at ATA’s 41,000-square-foot facility at the Sandia Science and Technology Park, where it will remain until its new manufacturing facility is operational next year.

The Virginia-based company provides a variety of products and services for the defense industry at sites around the U.S., but its Albuquerque operation generally focuses on space technology and “directed energy,” which refers to laser and microwave systems.

The new complex at MaxQ will be BlueHalo’s first dedicated manufacturing center, reflecting the company’s progression from research and development, and small-scale manufacturing to large-scale production of systems and components, said BlueHalo Vice President of Technical Solutions and Systems Mary Clum.

“This is a momentous step forward for BlueHalo — expansion into manufacturing,” Clum told participants at the Tuesday morning event.

About half of the new facility will be dedicated to manufacturing, with the other half encompassing offices, laboratories, test areas and secure spaces, said BlueHalo Chief Growth Officer James Batt.

“It will be a much larger facility (than ATA’s), with state-of-the-art manufacturing,” Batt told the Journal. “We are just busting at the seams here.”

This Article firstly Publish on www.stripes.com

Interview with Astronauts on the International Space Station

A Texas-size space summer has billionaires racing for the heavens

Why are Elon Musk and Jeff Bezos so interested in space?, Opinions & Blogs News