Elon Musk praised the Chinese Communist Party this week for its 100th anniversary as the Tesla CEO seeks to expand his business dealings in China, even though the United States relies on the SpaceX founder to launch satellites and astronauts into space.

The CCP spent the past week commemorating the party’s founding, pointing to China’s increased economic power while rewriting history on the tens of millions who died during the Great Leap Forward, the Cultural Revolution and whitewashing systemic repression at Tiananmen Square, Hong Kong, Tibet, and Xinjiang.

Chinese state-owned Xinhua News tweeted Wednesday that “China has realized the first centenary goal,” sharing a quote from Chinese President Xi Jinping, who claimed, “China has realized the first centenary goal building a moderately prosperous society in all respects. This means that we have brought about a historic resolution to the problem of absolute poverty in China, and we are now marching in confident strides toward the second centenary goal of building China into a great modern socialist country in all respects.”

Musk replied to the tweet, telling his 57.7 million followers: “The economic prosperity that China has achieved is truly amazing, especially in infrastructure! I encourage people to visit and see for themselves.” 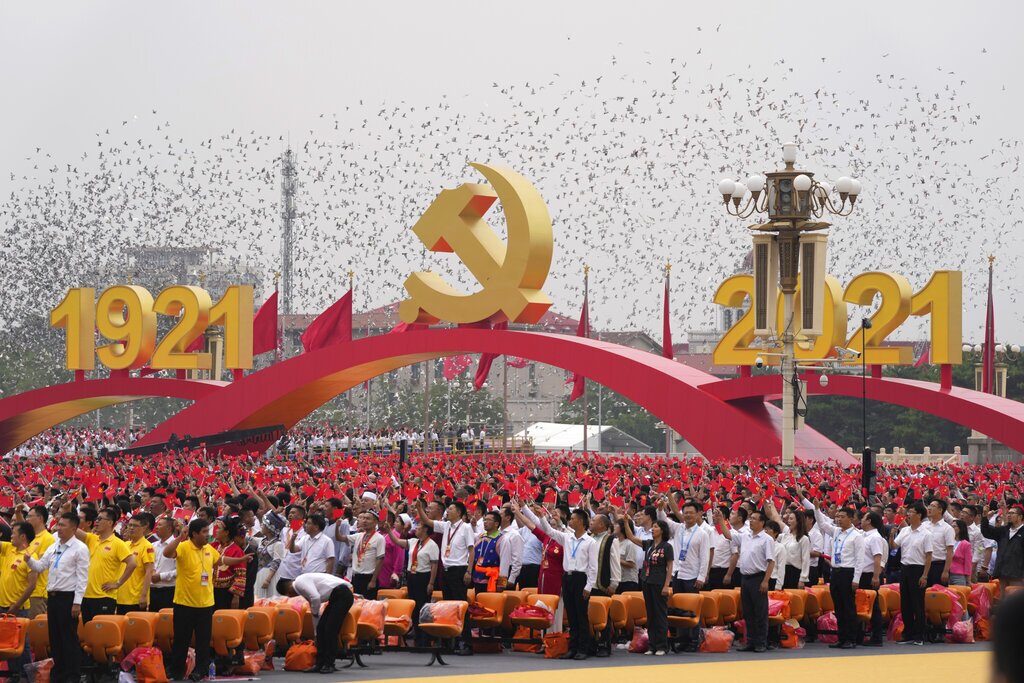 Musk’s comments were amplified by state-run media, with the Global Times running an article titled, “Elon Musk praises China’s ‘amazing’ economic prosperity on CPC centenary,” which claimed that “overseas companies congratulated China on its remarkable achievements made under the leadership of the Communist Party of China.”

However, it was reported in March that China is restricting the use of Tesla’s vehicles for the military and state-owned companies because of apparent data gathering concerns. Musk reportedly participated in a video conference with Chinese Premier Li Keqiang in March to address concerns and assure Chinese politicians the company would not provide the U.S. government with Chinese data.

Last week, it was reported “nearly all of the vehicles” that Tesla “has built and sold in China since opening a Gigafactory in Shanghai are being recalled over concerns about the cruise control system.”

Musk also praised China during an interview with China Central Television in March, touting the CCP’s 14th Five-Year Plan to increase its research and development spending by 7% each year in semiconductors, genetics, biotechnology, and quantum computing.

“What attracts me most about China’s Five-Year Plan is the tremendous amount of commitment to a low-carbon economy and ultimately to a sustainable energy economy. In the Five-Year Plan, China has committed to reach peak carbon emissions sooner than 2030 and to have a sustainable energy economy by 2060. These are very aggressive goals, and I think they are great goals, and I wish more countries actually had these goals,” Musk said.

The Tesla CEO added: “The Chinese economy, I think, is going to do extremely well over the next decade … China, I think, long-term will be our biggest market, both where we make the most number of vehicles and where we have the most number of customers … I would like to strike an optimistic note. I am very confident that the future of China is going to be great and that China is headed towards being the biggest economy in the world and a lot of prosperity in the future, and this Five Year Plan is gonna be a part of making that prosperity happen.”

“China rocks, in my opinion. You know, the energy in China is great,” he said. “The people there — there’s a lot of smart, hard-working people who really — they’re not entitled, they’re not complacent, whereas I see in the United States, increasingly, much more complacency and entitlement, especially in places like the Bay Area, LA, and New York.

SpaceX has U.S. government contracts with the Defense Department to launch satellites and NASA to carry astronauts and supplies into space. The Associated Press reported in 2019 the Pentagon was reviewing Musk’s federal security clearance after he smoked marijuana on Joe Rogan’s podcast.

NASA announced in April that, as part of its Artemis program getting the U.S. back to the Moon, SpaceX was selected “to continue development of the first commercial human lander that will safely carry the next two American astronauts to the lunar surface” with an award value of $2.89 billion. Blue Origin, owned by Amazon’s Jeff Bezos, filed a protest with the Government Accountability Office.

CLICK HERE TO READ MORE FROM THE WASHINGTON EXAMINER

SpaceX is currently conducting its 22nd “resupply services mission” for NASA, launching supplies in June and scheduled to return to Earth carrying 5,000 pounds of experiments and cargo next week. A SpaceX-powered NASA mission in late May 2020 carrying astronauts to the International Space Station was the first crewed launch from U.S. soil since the space shuttle program was shut down in 2011.

The Federal Communications Commission awarded SpaceX $885.5 million in federal subsidies in December to support rural broadband development through the Musk company’s Starlink satellite internet network, CNBC reported. The FCC said in April it was modifying SpaceX’s license by allowing up to 4,408 satellites, denying efforts by other companies to stop SpaceX’s plans.

Tesla did not respond to a request for comment.


This Article firstly Publish on denvergazette.com

Retina Brands and Launches SUCCESS Space – A Revolution in Coworking

how would they bring the International Space Station back down to Earth?