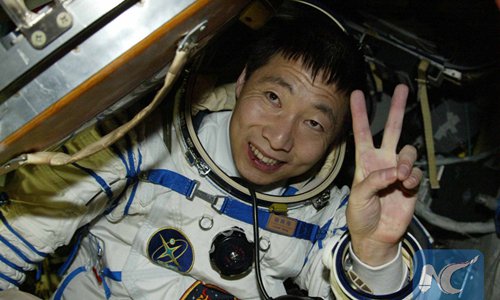 As the “space fever” continues to grip Chinese netizens after China has achieved successive breakthroughs in the aerospace sector, culminating in the recent launch of three taikonauts to China’s space station, an article written by China’s first taikonaut Yang Liwei describing his one day in space triggered heated discussions on social media platforms, with many saluting Yang’s heroic spirit and marveling at the country’s significant advancement in space technology.

Yang’s article, entitled “One Day in Space,” which was recently included in the seventh-grade textbook in Chinese middle schools, was posted on China’s Twitter-like social media platform Sina Weibo on Saturday, soon drawing tens of thousands of views within the first few hours.

As of press time, the article has attracted 130 million views and over 81,000 reposts, manifesting Chinese people’s lasting passion and interest in the country’s aerospace development.

Yang was 38 when he became the first Chinese person to go into space in the Shenzhou-5 manned mission in October 15, 2003, making China the third country – after the US and Russia – to have mastered manned space capabilities.

In his article, Yang recalled several breathtaking moments when he thought he could not make it through the trip back. “When the rocket lifted to a height about 30-40 kilometers above the ground, I felt it begin to vibrate violently, and it was extremely painful,” he said.

Vibrations in the spacecraft below 10 Hz can damage the internal organs and even threaten a person’s life, Yang explained.

“Then the accident happened. The fierce vibration was shattering my body, and the pain had grown unbearable. I thought I was going to die,” Yang recalled.

The deadly moment lasted for 26 seconds. When it was finally over, the taikonaut, all alone in the vastness of space, felt like he had been reborn.

As the ground control finally saw Yang slightly blinking his eyes through the surveillance camera onboard the craft, his colleagues burst out crying, “He’s blinking! Yang is alive!”

Before the Shenzhou-5 mission, the year of 2003 had seen a number of tragedies in mankind’s conquest in space. The US space shuttle Columbia disintegrated on reentry in February, killing all seven crew members. A Brazilian space rocket exploded on its launch pad in August, killing 21 people, the Xinhua News Agency reported.

In the article, Yang described the “mysterious knocking sounds” from outside the craft. He still does not know where they came from. He also described what the Earth, his country, and his city looked like from space. “I flew over Beijing and saw the mountains in daytime and sparkling lights at night. And there live my comrades and my loved ones.”

Yang shared an interesting episode in the article. After several attempts from his cabin, he did not see the Great Wall, which many believed was the only manmade structure on Earth that could be seen from space. The Shenzhou-6 and -7 taikonauts also could not see it, Yang wrote.

After his return, Yang reported the abnormal vibrations during the rocket’s ascent to fellow scientists, who solved the issue once-and-for-all before the Shenzhou-6’s launch. According to Nie Haisheng, who took the Shenzhou-6 craft to space in 2005, his first trip to space was much cozier, and he could not detect any vibrations.

The country’s manned spaceflight program was established in 1992.

After Yang’s breakthrough, another 12 taikonauts have been sent to space over the years, with the Shenzhou-6 fixing the vibration problems of its predecessor, the Shenzhou-7 laying foundation for the spacecraft’s docking and spacewalk, and the Shenzhou-8 to Shenzhou-11 continuing to upgrade the abilities on various fronts that eventually led to the successful Shenzhou-12 mission that sent the first group of Chinese to the nation’s space station.

Compared with previous experiences, the Shenzhou-12 ride was a lot faster, smoother and cozier for the three taikonauts.

Merely 6.5 hours after its launch, the Shenzhou-12 spacecraft pulled off an automated rapid rendezvous and docking with the orbiting Tianhe core module, a first for China’s manned space program.

Pang Zhihao, a Beijing-based senior space expert, hailed the breakthrough technology, saying it would tremendously save taikonauts from longer stays in the narrow space on board the spacecraft, making their travel more comfortable.

Apart from faster transport from the Earth to space, mission planners have tried their best to make the taikonauts’ stay in the space as comfortable as possible.

The space for in-cabin activities in Tianhe core module is some 110 cubic meters, with three separate bedrooms and one bathroom, the Global Times learned from developers of the space station program contractor China Aerospace Science and Technology Corporation (CASC).

A number of new technologies have also been applied to the core cabin, including space Wi-Fi and Bluetooth, smart home applications, private phone communications and a great variety of over 120 kinds of space food with balanced nutrition.

Seeing the progress made over the past 18 years since his first trip to space, Yang said with humor that he “envied” a lot that his fellow spacemen now have such a big new home, which shows how China’s space strength has grown.

For this atmospheric exploration, NASA teams up with Germany’s space agency

Tennessee State & other HBCUs are sending mementos into space