SINGAPORE – Chinese fine dining restaurant Jing Seafood has been a mainstay in Marina Bay for over a decade but owner Loh Lik Peng was forced to down the shutters last month after struggling with border closures and dine-in curbs.

Mr Loh said: “We were hoping that this year, the Covid-19 pandemic would turn the corner.

“But there’s no way you can replace 19 million tourists with the much fewer Singapore residents, no matter how much they spend.”

Mr Loh, 49, is also the founder of restaurant group Unlisted Collection, one of many in the food and beverage services sector that has been battered by the pandemic.

While figures show that a significant number of new businesses opened last year, some sectors like F&B, tourism and retail trade have seen their fair share of firms going belly-up.

There were 43,335 business closures registered last year, with a further 20,110 closing from January to May this year, an increase from the 18,786 in the same period last year.

Maybank Kim Eng senior economist Chua Hak Bin said: “Maybe businesses were still holding out despite the circuit breaker measures last year, hoping the pandemic will be short-lived. A year on, some businesses may have depleted their cash reserves and decided to adjust to the new reality.”

In the beleaguered F&B industry, 944 firms registered their cessation in the first five months of this year, up from the 867 that shuttered in the same period last year.

The shutters came down on 142 travel agents from February last year to June 21 this year, said the Singapore Tourism Board (STB), with 39 indicating that their decision was due to challenges brought about by Covid-19.

“The remainder cited various non-Covid-19 related reasons such as change in business focus or the retirement of the founder of the travel agency, especially the smaller agencies,” said Mr Kenneth Lim, STB director of travel agents and tourist guides.

Singapore has also had to defer its air travel bubble with Hong Kong with plans to review it early next month.

Professor Sumit Agarwal of National University of Singapore Business School said it is not just about the companies that are directly hit by the pandemic.

“There are also others that support those sectors, such as laundry firms that support hotels and salons that rely on the travel industry. There are lots of ramifications on second-tier businesses in periphery industries,” he added.

Some of these supporting firms include money changers, which have seen much less business due to the lack of travel.

There are 297 money changers in Singapore but 41 have temporarily closed shop, said the Monetary Authority of Singapore (MAS).

Mr Han Siong, 40, co-founder of money changer FX Buddy, said business has plunged by 80 to 90 per cent, adding: “I remain hopeful that things will get better, as more residents are being vaccinated.”

The way the pandemic has hit certain industries much harder than others makes the crisis unique, added Singapore Management University assistant professor of finance Aurobindo Ghosh.

“Unlike most financial crises, the impact was not uniform across all sectors with certain sectors like F&B, entertainment, hospitality, travel and tourism taking a big brunt of the fallout with the social distancing and travel restrictions.”

Professor Boh Wai Fong, deputy dean of Nanyang Business School at the Nanyang Technological University (NTU), said: “I think that businesses that rely heavily on social presence and experience have suffered the most.” This includes restaurants that offer the dine-in experience as part of their appeal.

“Retail shops that rely on heavy footfall are also badly hit because there is little human traffic due to social distancing and work from home measures.”

It is no wonder that the high profile closures have come from the F&B and retail sectors, such as Robinsons department store and familiar restaurant names like Swee Kee, said Ms Selena Ling, OCBC Bank head of treasury research and strategy.

But some firms are adopting technology to weather the storm, such as F&B outlets using delivery options such as Deliveroo.

They invested $50,000 and were able to hire a small team after getting a government salary support grant. They sold 10,000 packets of chips online in four months.

Professor Foo Maw Der from NTU’s Nanyang Business School said: “With high vaccination rates among Singapore’s major trading partners, we should see increased commercial activities, even travel, to these countries, including to China, America and Europe.”

Prof Ghosh agreed that business sentiment is on the upswing, but some firms might not be saved.

“So I foresee some business closures though new business will also start to take their place through more of a process of creative destruction,” he said. 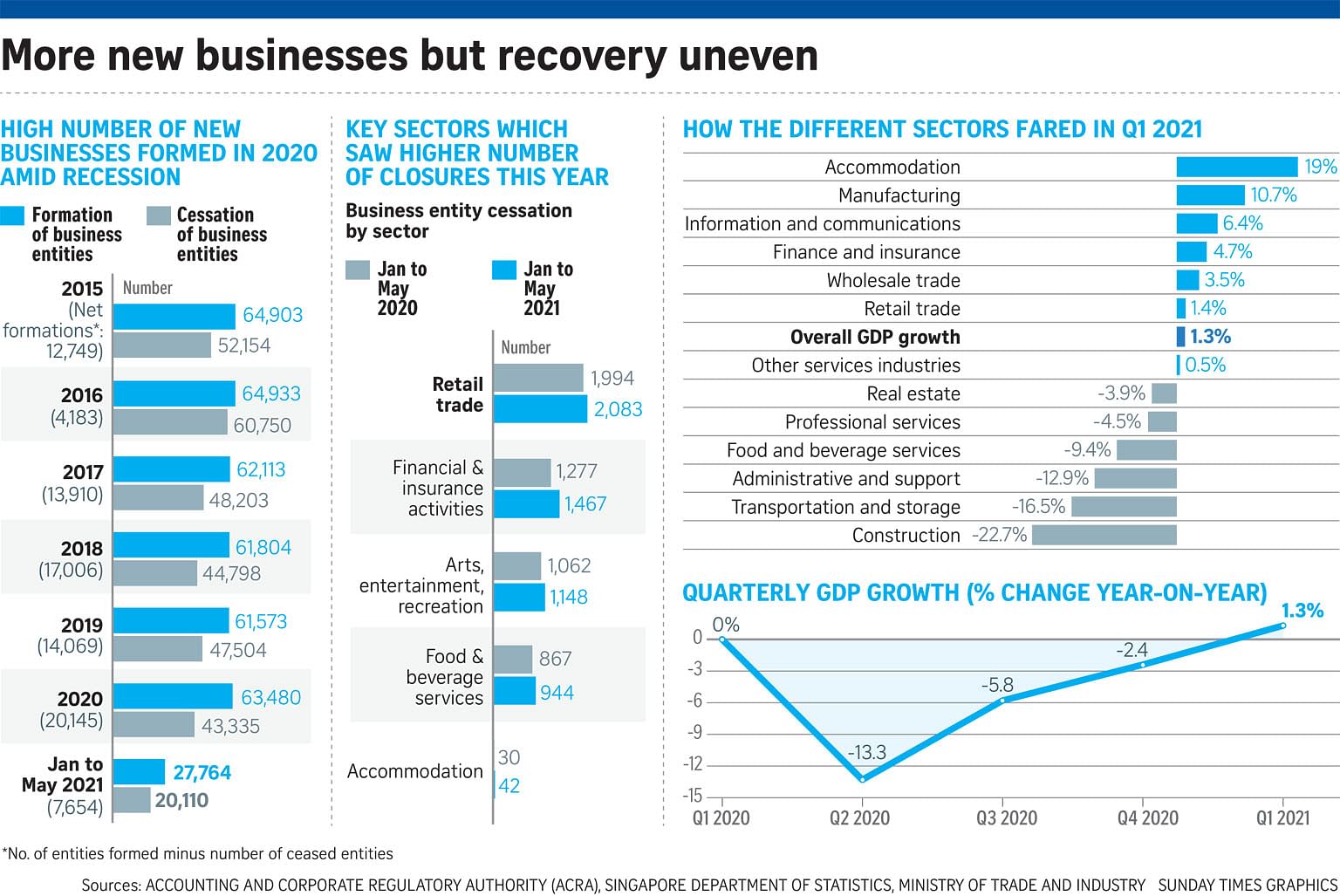 This Article firstly Publish on www.straitstimes.com