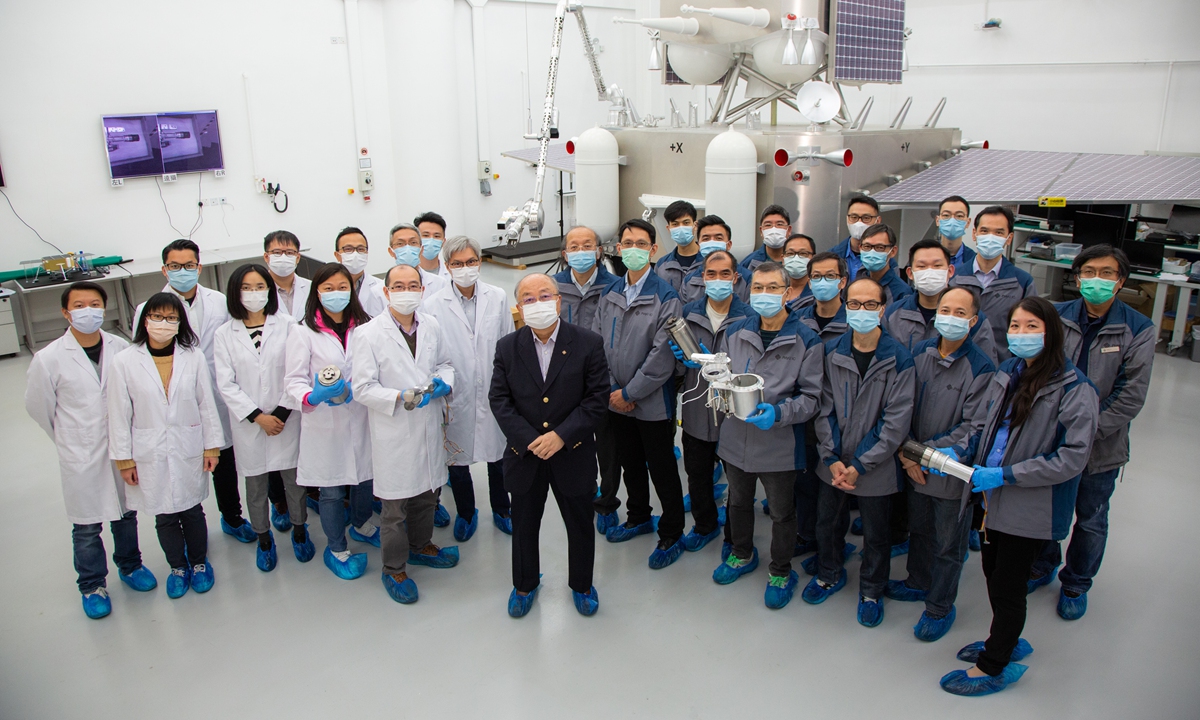 Professor Yung Kai-leung’s team includes some 20 researchers with an average age of 30 to 40, and the youngest is only 21 years old. Some of them are still students at PolyU, and the majority are Hong Kong locals. Photo: Courtesy of Hong Kong Polytechnic University

China’s steady and robust development in the space sector will provide a bigger stage for Hong Kong’s scientific research circle, especially for the younger generation of scholars, Professor Yung Kai-leung, who leads a research team at the Hong Kong Polytechnic University (PolyU) that developed and manufactured one of the key systems for the Chang’e-5 lunar sample return mission, told the Global Times in an exclusive interview on Tuesday.

Yung made the remarks ahead of visit by a group of aerospace experts to Hong Kong. The members of the group are expected to give speeches on China’s fruitful space programs such as the Chang’e-5 lunar exploration mission and the BeiDou Satellite Navigation System.

Yung’s team at the PolyU participated in the historic undertaking, the “Surface Sampling and Packing System,” in collaboration with the China Academy of Space Technology (CAST). The system accomplished the tasks of automatic sample collection and packaging on the lunar surface, following the soft landing of the Chang’e 5 probe on December 1, 2020.

As he recalled the challenges that he encountered during the system’s development, Yung said his lab was on the edge when rioters stormed PolyU during the peak of the 2019 year-long social turmoil in Hong Kong.

“At the time, I couldn’t sleep at night, just worrying that the lab might be sabotaged,” Yung recalled.

“The only way was to try to stay as low-profile as possible,” Yung told the Global Times. “Fortunately, not many knew the location of the lab.”

Yung’s team decided to relocate some of the most important instruments to continue their work, as they had a busy schedule of research projects during the time, including tasks assigned by the central government.

In mid-November 2019, rioters left PolyU in chaos. A number of laboratories on campus were vandalized and dangerous chemicals were taken from the laboratories that might pose a serious threat of harm to the public.

According to Yung, the team will join the future Chang’e-6 mission in a similar quest for lunar samples, and new designs will be added to the old system to meet the new mission’s requirements.

Yung said that his team includes some 20 researchers with an average age of 30 to 40, and the youngest is only 21 years old. Some of them are still students at PolyU, and the majority are Hong Kong locals.

While having participated in the lunar surface sampling work, Yung said he had never had the chance to see the lunar soil in person, and he expressed his earnest expectations for the upcoming exhibition in Hong Kong.

He told the Global Times that his team is currently applying to the China National Space Administration to keep some of the lunar material in Hong Kong for scientific research, which will be carried out with other universities in the region after the samples are in place.

Commenting on the latest Shenzhou-12 mission, where three taikonauts entered the country’s own Tianhe space station core module, he said that “Of course, I was very proud and thrilled. More importantly, I could see that Hong Kong scientists from the younger generations now have a new platform on which to study the development of space technology, and opportunities to experiment with their ideas such as conducting research in the microgravity environment in the space station.”

Yung said he and his team would be ready for the country’s call for future lunar missions including the Chang’e-7 and Chang’e-8, as well as Mars sample-retrieval quests and future asteroid probe missions.

The “star team” of aerospace experts arrived in Hong Kong on Tuesday afternoon for a five-day visit, the Xinhua News Agency reported, including the commander-in-chiefs and the chief designers of the country’s Long March carrier rocket series, Shenzhou manned space programs, BeiDou Satellite Navigation System, and the Tianwen-1 Mars mission.

They will hold seminars at PolyU, the University of Hong Kong and six secondary schools, while attending an opening ceremony of the lunar soil exhibition on Saturday, according to the Xinhua report.

Xie Jun, chief designer of the BDS-3 satellite system at CAST, confirmed the speech scheduled on Thursday at the campus of Hong Kong Polytechnic University, in speaking with the Global Times on Tuesday.

According to Xie, his speech will highlight the aerospace and BeiDou spirits, and serve as a channel for communication with the university’s faculty and students.

Such visits by aerospace heavyweights are significant in many ways. Local intellectuals would understand better that China has conquered areas of high technology that were considered as exclusively Western, and China has only done it better, Song Zhongping, a Hong Kong-based space analyst and TV commentator, told the Global Times on Tuesday.

It would also send a clear message that there are tons of opportunities in the science and technology sector that Hong Kong schools could participate in, and it is about time that Hong Kong joined the country’s strategic development, Song noted.

Hong Kong should embrace such a golden opportunity and transform its old financial center and offshore trade hub mentality into creating an innovation and scientific one instead, he said.

Licenses For Exports To Russia Related To Commercial Space Launches Must Be Granted By September 1, 2021 – International Law