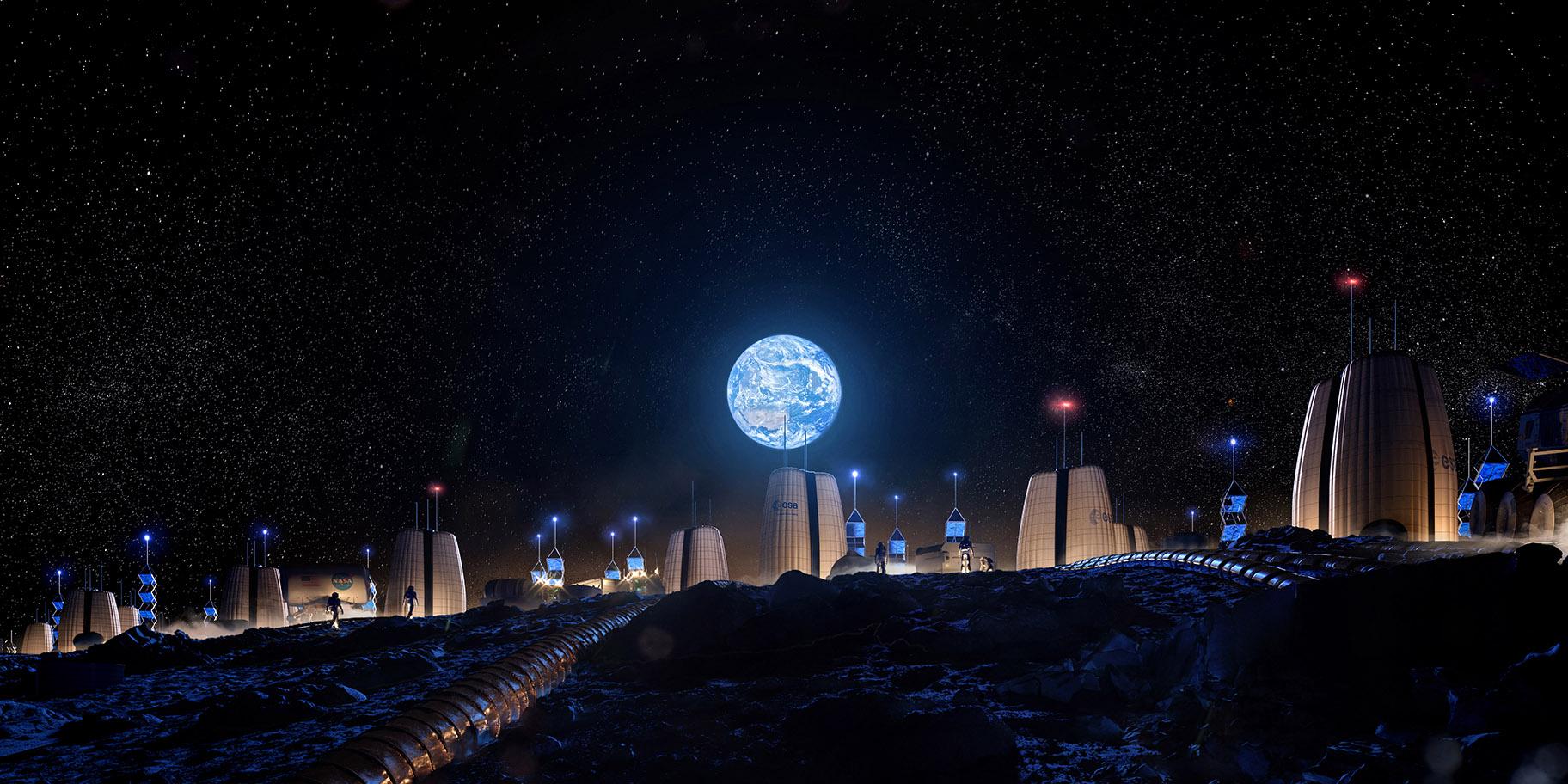 A vision of what a permanent human presence on the moon could look like. (Credit: SOM / Slashcube GmbH)

The firm, known as SOM, is currently working on a redesign of the State and Lake CTA station downtown.

But it also has its sights set beyond Chicago — and even beyond Earth. In collaboration with the European Space Agency and MIT, SOM has developed a design for a lunar colony grounded in science fact rather than science fiction.

That design is now being showcased at the world-renowned Venice Biennale arts festival in Italy.

We spoke with Georgi Petrov, one of the lead architects on the project, to learn more. Petrov is associate director at SOM where he works as a structural engineer and, at least part of the time, as a space architect.

How did Skidmore, Owings & Merrill come to be designing a colony on the moon? I understand this was an initiative from the European Space Agency.

There’s been a couple of us designers here (working on this). I personally work in the structural engineering group although I’m trained mostly as an architect and there’s another guy in our digital design group called Daniel Inocente – senior architectural designer at SOM — and he’s also been very interested in space architecture for a long time. Both of us work at SOM on a lot of terrestrial projects … a lot of airports and big stuff. But we’ve been interested in space architecture, and it’s actually Daniel through contacts at the European Space Agency who put this agreement together where we had this collaboration where we designed a moon village. 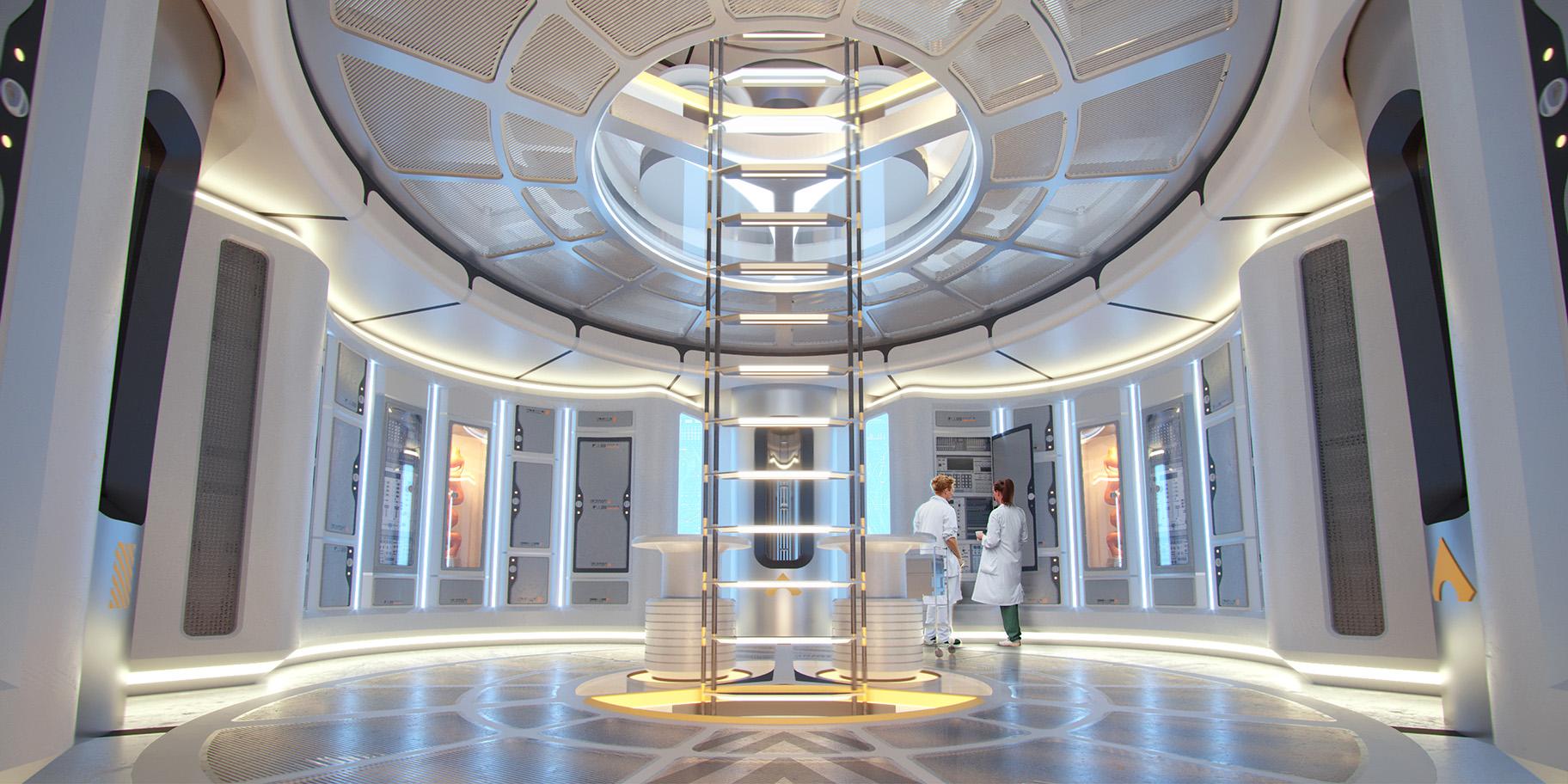 The previous director general of the European Space Agency had this idea of a moon village and gave a speech in 2015 where he basically challenged the world to design how we go back to the moon with the idea that we do it collaboratively. To use the precedent of the International Space Station where it’s a lot of countries coming together to share the same infrastructure. So we wanted to apply that paradigm for how we go back to the moon, as opposed to back in the ‘60s when it was not about collaboration, it was about competition. So our task was to give some form to this idea of what does a moon village look like? What does it actually translate to in physical form?

All the architecture and the engineering are science fact. The only bit that would be science fiction is the funding.

All of the technology that we try to show is something that has either already flown in space or something that is already on the (drawing) boards and we have a pretty good idea of how it works. There’s nothing that’s way out in the future. It’s stuff that if there is the commitment and funding it could be implemented within a decade at most. Not every little bit of engineering is worked out, there’s still a lot of work to do there, but all the basic technologies are things that are pretty established already.

Were you just designing lunar habitats or the entire infrastructure and ecosystem for what a colony might look like?

We worked on three different levels. We started with the master plan. Choosing an actual site. The moon is fairly well documented so you can pick an actual location and not an imaginary or theoretical one and design around that. We worked on a master plan for how we could go from one habitat to several dozen over many years. And from one crew of four people to a community of dozens and maybe even hundreds.

And then we concentrated on one of the habitats. By definition, the first one that goes there has to have everything in it because it’s the only habitat you have. So we designed one that has crew quarters and labs and other working environments and so on, but we were always thinking that when you add more of these habitats then just like a settlement on Earth you would start to specialize. So you would have one that’s maybe just beds and crew quarters and then another that’s just a lab and then maybe another one for storage and things like that. 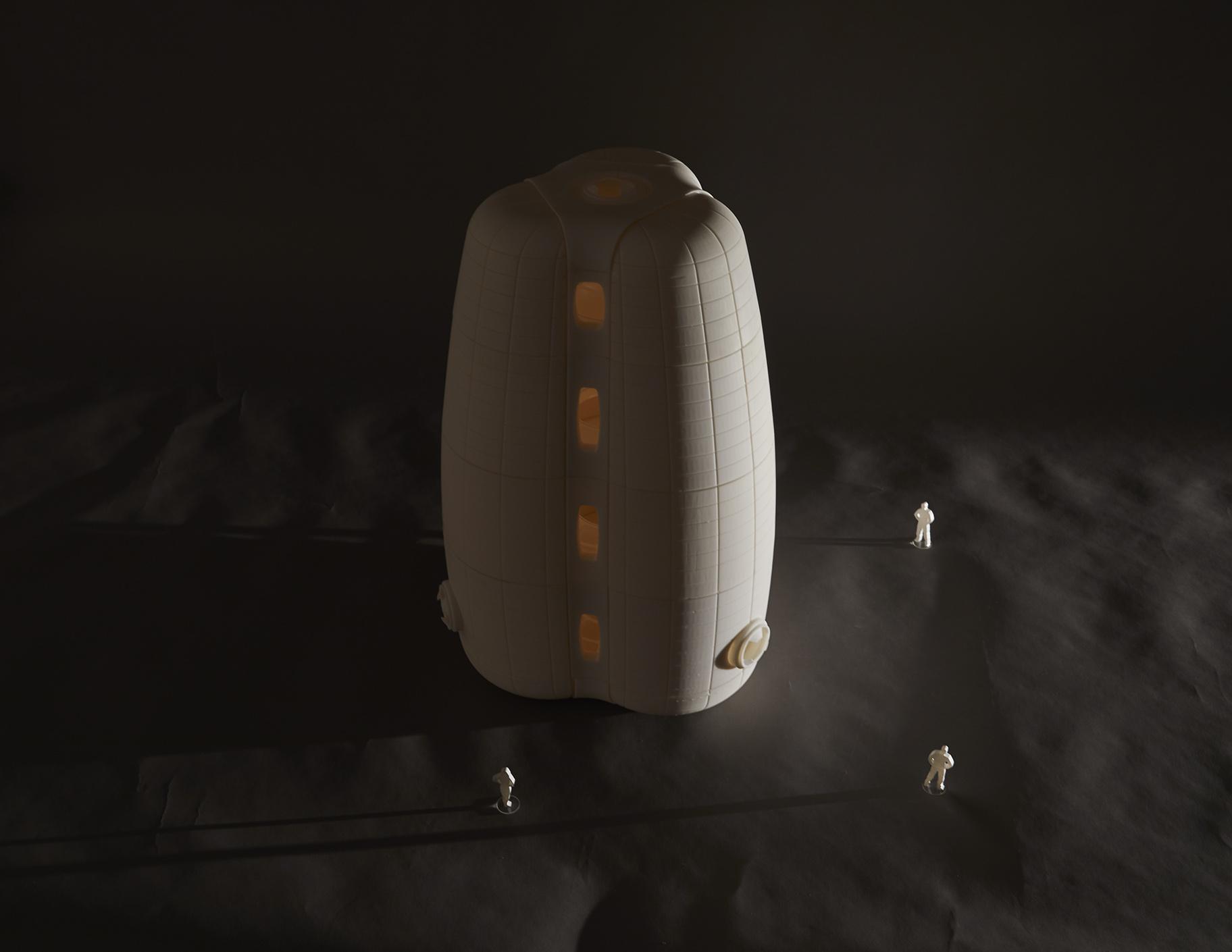 The ones that we show in our images and in our video are just the first one … but to bring it back to an analogy on the Earth, every new house learns from the previous house. So we designed the first one with the idea that as you live on the moon you will improve the design of the habitat. And then we worked how some of the details and the connections and how the whole thing would be put together. So we worked at three different scales.

How would these habitats be built? Would they have to be brought to the moon and assembled or can we use resources on the moon to build them?

The moon is not very resource rich. The reason we are going to the South Pole is that it’s one of the few locations where there are actually resources. There’s really good evidence that you have water and other organic molecules that you could use to fabricate things there as well. The first habitat that we’ve designed would be brought entirely from Earth, but a lot of the infrastructure could be stuff that’s made on the moon. For example, the landing pad and the foundations for our habitats. And then the idea is that as people gather there one of the main things to do on the moon is to learn how to build using local resources. One of things you could do early on is, besides the foundations and the roads, you could build protection to protect the habitat from radiation which is one of the big issues that we have to deal with on the moon.

NASA is targeting returning humans to the moon by 2024 with its Artemis mission – although most observers expect that date to slip. Do you think we will see some of these designs or variations of them on the moon in our lifetime?

I’m old enough to have lived through several proposals for going back to the moon and lived through several of these disappointments. The key thing now is that the commercial space sector has really gained maturity and we do have reusable rockets which has the promise to really lower the cost of getting material to the moon. I think these new emerging partnerships between the space agencies and the commercial sector has a lot of promise to actually get us (back) there this time. I’m still very hopeful that I will get to see something and I really hope that I do actually get to participate in the design of what actually flies there.

The exhibit at the Venice Biennale – tell me about that. What kind of installation can visitors expect to see if they are lucky enough to get to Venice this summer? 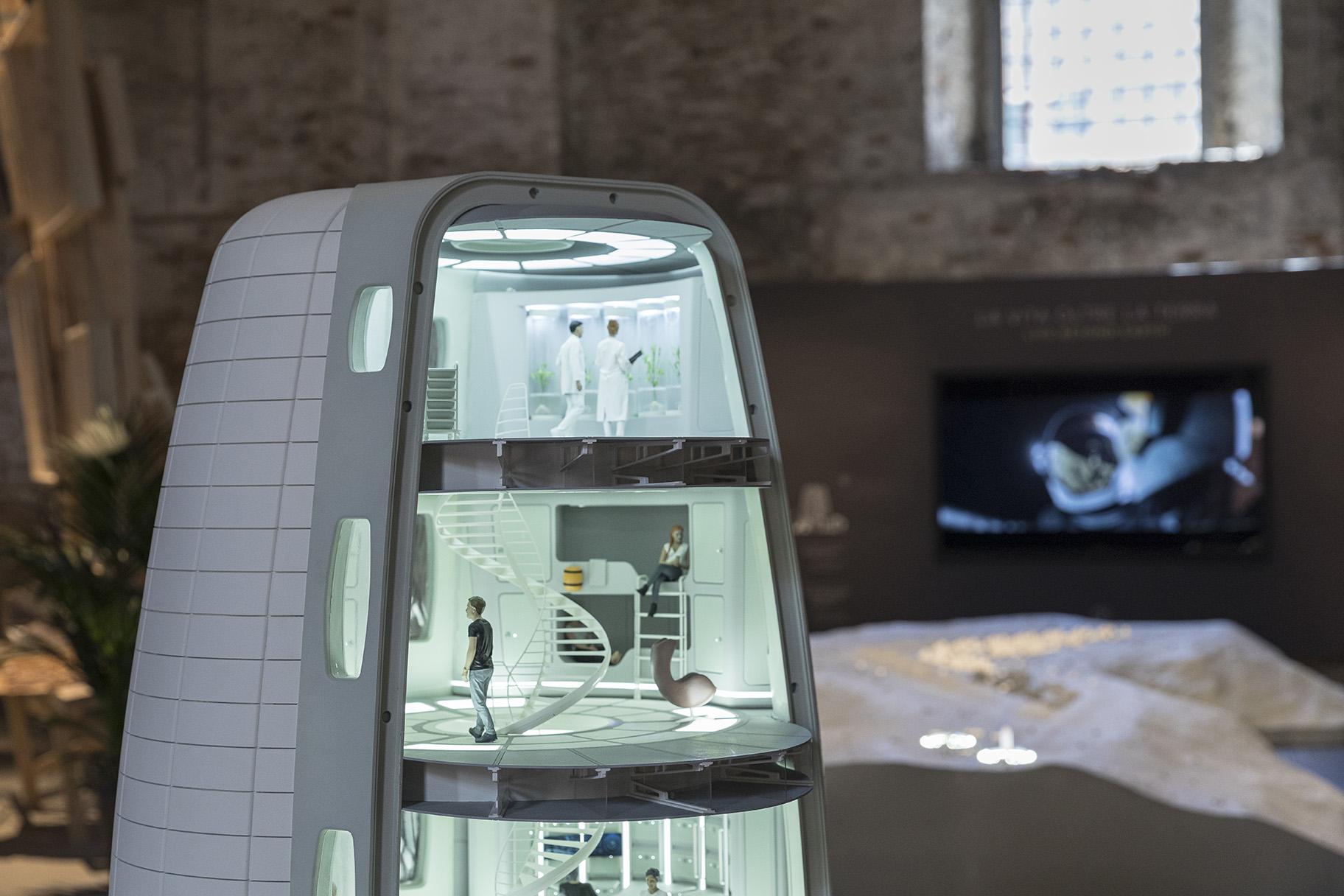 Biennale Architettura 2021: How Will We Live Together? (Credit: Laurian Ghinitoiu)

The theme for the biennale this year is how we will live together, which was very appropriate to what we were doing. The whole idea of the moon village is that we would live together on the moon. So we fit very well with the theme this year. We have a couple of models. We have a big model showing the master plan and what the moon village would look like with hundreds of people. We have a pretty sizable model as well showing one of the habitats where you can go in and look around. We also produced a four-minute video called “Life Beyond Earth” which tells the story of how the habitat gets to the moon and our vision of how people would live there.

Note: This story will be updated with video.

This Article firstly Publish on news.wttw.com

What is space hurricane? Here is everything you need to know

2020 was record year for near-Earth discovery in space