Amazon founder Jeff Bezos will put tiny Van Horn, Texas, on the international map next month when he’s scheduled to go into space from a launch site near there.

Bezos’ Blue Origin aerospace company’s rocket launch site is in a secluded desert area near Van Horn, a tiny town of about 1,800 people located about 120 miles southeast of El Paso.

Bezos recently told the world on Instagram that he and his brother, Mark Bezos, will be launched into space July 20. They will be joined in the minutes-long flight by the winner of an online auction Saturday, which already has drawn a high bid of $4.8 million.

The launch has generated more excitement outside of Van Horn than in the area itself, where many residents are taking it in stride, said Van Horn Mayor Becky Brewster, who previously was the city administrator for 30 years.

“People interested in spaceflight are getting excited; people not interested in it are not particularly keeping up even when (Blue Origin rocket) launches are,” she said.

“I am a Trekkie and Star Wars person from elementary school age, so all this is fascinating to me,” said Brewster, 63.

“A lot of people are interested in space and space travel,” so Bezos’ flight should put Van Horn in the spotlight and put the small town on the international map, she said.

Count Adrian Norman, the Van Horn Bank manager and a Culberson County commissioner, among the excited.

“There’s not a whole lot going on here, and this is something that will be known around the world. It’s neat to have in our backyard,” said Norman, 44, a Van Horn native. “You see it on the national news now. As it gets closer, I’m sure it will get more publicized.”

Blue Origin’s launch site, which began testing rockets in 2012, has resulted in some Blue Origin workers moving into Van Horn, some buying homes, and brought more business to contractors, restaurants and hotels, which fill up with Blue Origin personnel prior to periodic rocket launches, Brewster said.

The mayor and Norman hope Bezos’ flight, and the prospect of future spaceflights will boost tourism — one of the area’s economic staples, along with ranching and farming.

“We promote ourselves as the crossroads of the Texas Mountain Trail Region” because Van Horn serves as a hub to day trips to the Guadalupe Mountains National Park, Big Bend National Park and other regional attractions, Brewster said.

Space could become another part of that crossroads, she said.

However, Blue Origin’s Launch Site One, located off Texas State Highway 54, the route to the Guadalupe Mountains, is a secretive area that Van Horn-area residents know little about, Brewster said. It’s about 25 miles north of town.

Only recently, the company began giving advance notice of rocket launches and now offers launch site tours by appointment with the requirement of signing a nondisclosure agreement, she said.

Brewster usually views periodic rocket launches from her front yard. The rocket looks like a tiny dot from there, but she augments that view with Blue Origin’s online stream of launches, she said. Some townspeople go out on Highway 54 for a closer view.

Local officials have been tossing around the idea of asking the Texas Department of Transportation to build a rocket launch viewing site along Highway 54, similar to the Marfa Lights viewing area along U.S. Highway 90, near Marfa, she said.

Bezos and his two fellow civilian astronauts will be launched into space in a capsule atop a Blue Origin rocket. The capsule will be released into space and will parachute back to Earth and land near the launch site.

The rocket will return to a landing pad near the launch pad.

The spaceflight will last about 10 minutes from launch to capsule landing in the West Texas desert, according to the Blue Origin website.

Who will fly with Bezos and his brother will be decided through a live, online auction Saturday beginning at 11 a.m. CT on blueorigin.com. Pre-bidding closed with a high bid of $4.8 million. More than 7,500 people from 159 countries registered to bid, Blue Origin reported.

Money from the winning bid will be donated to Blue Origin’s foundation, Club for the Future, to inspire future generations to pursue careers in science, technology, engineering and math, according to the company.

“That kind of money would fix our water system in Van Horn,” Mayor Brewster noted. 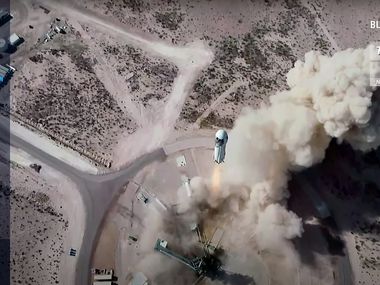 This Article firstly Publish on www.dallasnews.com

If a satellite falls on your house, space law protects you

Here’s How SpaceX Plans to Dominate the Space Tourism Market