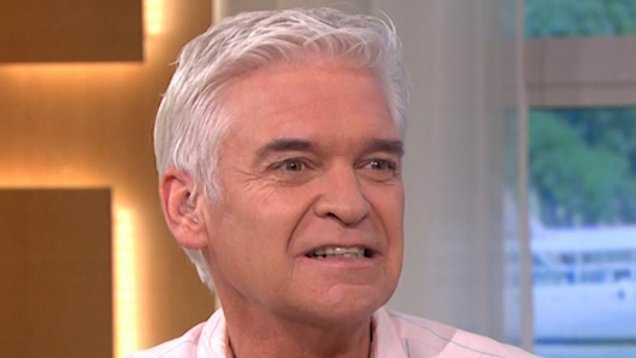 To view this video please enable JavaScript, and consider upgrading to a web
browser that
supports HTML5
video

Phillip Schofield told the panel on This Morning that he would love to fly to space for the ITV morning programme.

This revelation came after he, Holly Willoughby, Gyles Brandreth and Vanessa Feltz were discussing multi-billionaire Jeff Bezos being flown into space.

The Amazon boss confirmed he will be going up into space aboard a rocket from his Blue Origin space company.

Bezos, who is due to step down as Amazon CEO, will join his brother Mark on the first human flight aboard the New Shephard spaceship on July 20.

‘What kind of madness is this? Don’t earn all of this money if you’re going to risk putting yourself in space. Don’t go shooting yourself out into the atmosphere,’ Gyles said.

Referring to her co-host Phillip, Holly said: ‘You say it’s crazy and mad but ask Mr Buzz Lightyear over here, he’d be up in a heartbeat.’

Sure enough, Phillip said he would fly up ‘without question’ and added that he’d hoped someone would pay for his ticket.

When questioned why he would want to, he said: ‘Why not experience something like that?’

Phillip explained that he would love to be offered the opportunity.

‘I did watch this on the news last night and I found myself conflicted, because I thought, what an amazing thing to do, send me to the moon. I’d definitely go and a lot of people would say “Yeah, send him to the moon”,’ the host joked.

‘Obviously, I’m not going to pay a massive amount of money for it, you’d hope to be invited at some stage. I’d do it for telly, but I did think what an incredible waste of fuel and resources, it’s not very green.’

Gyles couldn’t help but laugh before he added: ‘I love the way you’re saying that, “Oh maybe somebody could invite me on a trip to the moon”.’

The host erupted into laughter.

Phillip explained that he’s so eager, he would do it tomorrow.

This Morning airs weekdays at 10am on ITV.

If you’ve got a celebrity story, video or pictures get in touch with the Metro.co.uk entertainment team by emailing us celebtips@metro.co.uk, calling 020 3615 2145 or by visiting our Submit Stuff page – we’d love to hear from you.

For more stories like this, check our entertainment page.

Follow Metro.co.uk Entertainment on Twitter and Facebook for the latest celeb and entertainment updates. You can now also get Metro.co.uk articles sent straight to your device. Sign up for our daily push alerts here.


MORE : Phillip Schofield firmly against extending lockdown: ‘Suicide is up, anxiety is through the roof and businesses are folding’

This Article firstly Publish on metro.co.uk

Virgin Galactic gets FAA’s OK to launch customers to space

Do you know the right way to disinfect your space?