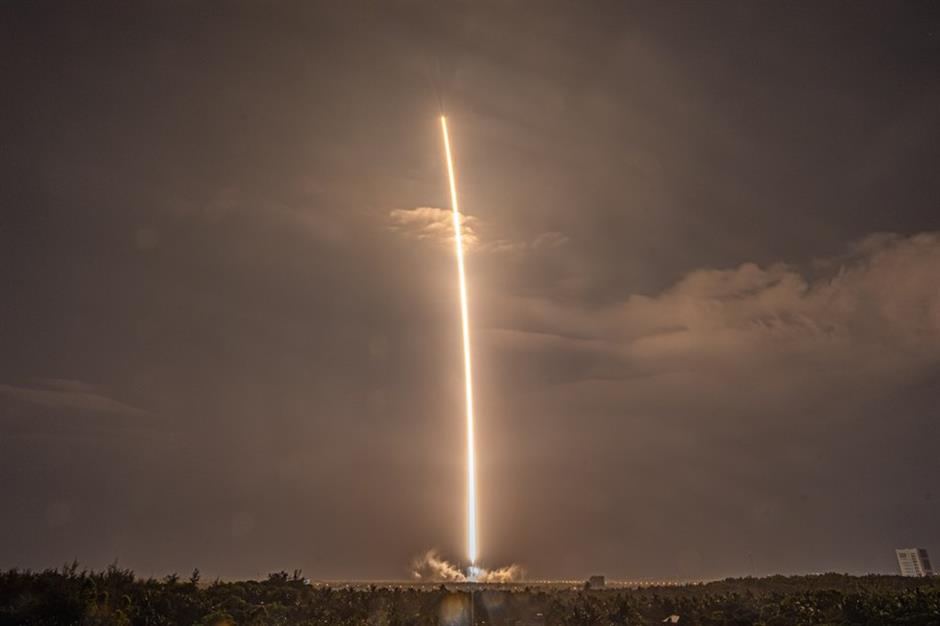 The Long March-7 Y3 rocket, carrying the Tianzhou-2 cargo spacecraft, blasts off from the Wenchang Spacecraft Launch Site in south China’s Hainan Province on May 29, 2021.

China sent the cargo craft Tianzhou-2 into space on Saturday, and it successfully docked with the space station core module Tianhe early on Sunday to deliver supplies, equipment and propellant.

The Long March-7 Y3 rocket, carrying Tianzhou-2, blasted off from the Wenchang Spacecraft Launch Site on the coast of the southern island province of Hainan at 8:55pm (Beijing Time) on Saturday, according to the China Manned Space Agency (CMSA).

After 604 seconds, Tianzhou-2 separated from the rocket and entered its designated orbit. At 9:17 pm on Saturday, the solar panels of Tianzhou-2 unfolded and began working properly.

China launched its space station core module Tianhe on April 29. The country plans to complete the verification of key technologies and the in-orbit construction of the space station through multiple launches within two years.

Saturday’s launch was the first time that the space station cargo transportation system, composed of the Tianzhou spacecraft and Long March-7 rockets, was put into use.

Measuring 10.6 meters in length and with a maximum diameter of 3.35 meters, the Tianzhou-2 cargo ship has a maximum takeoff weight of 13.5 tons and carries 6.8 tons of goods and materials.

More than 160 large and small packages, including supplies for astronauts and space-science equipment, and two tons of propellant for Tianhe have been loaded into the cargo freighter, according to the China Academy of Space Technology (CAST).

Lei Jianyu, a designer of Tianzhou-2 at the CAST, said that only two types of cargo spaceships currently in service globally have a maximum carrying capacity of more than 5 tons. “China’s Tianzhou is one of them, and is at the world-leading level.”

The Tianzhou-2 cargo freighter is composed of cargo and propulsion compartments. Supplies are loaded inside the pressurized cargo section, and propellant in the propulsion section.

The propellant used for the Tianzhou-2’s flight and the propellant for refueling the Tianhe core module can be flexibly distributed according to demand.

As the ancient Chinese said, to carry out an important task, supplies like rations and forage should go ahead of troops and horses. During the construction of the space station, cargo spaceships will always be launched ahead of crewed missions.

“We will transport support materials, necessary spare parts and equipment first, and then our crew,” said CMSA Director Hao Chun.

Yang Hong, chief designer of the space station at the CAST, said that the launch missions of China’s space station are closely coupled. Within 48 hours after Tianhe entered orbit, the core module underwent a status evaluation, and Tianzhou-2 then began its launch countdown preparations.

Following Tianzhou-2’s docking with Tianhe, the Shenzhou-12 crewed spaceship will enter its countdown preparations for launch.

Three astronauts aboard Shenzhou-12, who will stay in orbit for three months, will unpack the goods stowed inside Tianzhou-2 to obtain their living and working materials.

In addition to supplies for three astronauts, the gear delivered by Tianzhou-2 includes two spacesuits for extra-vehicular activities, each weighing more than 100 kg.

Tianzhou-2 also sends spare parts for a life support system. The system, which is necessary for astronauts to stay on the moon or explore deeper space, is installed in the Tianhe core module. It is the first such installation in a Chinese spacecraft.

From staple foods to non-staples, from meat to vegetables, the menu design is of high quality and appetizing for astronauts. Famous stir-fried Chinese dishes like fish-flavored shredded pork and Gong Bao (Kung Bao) chicken are both on the menu.

Engineers have designed a special structure in the 18-cubic-meter cargo craft, dividing the interior into cargo compartments with honeycomb-like panels. Each compartment can hold several packages of different sizes, so that the packages can be efficiently placed in the compartments like building blocks.

To improve the efficiency of loading, the research team has made 26 types of packages of different sizes, including some in trapezoidal and wedge shapes to adapt to the cylinder cabin structure of the craft. In addition, they have developed safety locks, similar to those of aircraft seats, to hold the packages in position while in space.

The craft is also equipped with an information-management system. Each package has a label pasted onto it with a radio-frequency identification function, allowing the goods to be identified within a certain range.

Yang Sheng, a designer of Tianzhou-2 at the CAST, said that China’s space station has applied the country’s advanced logistics-management technologies, enabling astronauts to obtain the cargo location and information by scanning QR codes. With intelligent positioning, the astronauts can find and access the packages quickly.

The cargo craft will operate in orbit for one year. Its power supply capacity is not less than 2,700 watts. It can also carry out multiple in-orbit refueling missions.

Tianzhou-2 docked with the rear docking port of Tianhe. It will replenish the core module propellant and wait the arrival of Shenzhou-12. The crewed spacecraft will dock with Tianhe’s node at the front end.

After three astronauts return to Earth aboard Shenzhou-12, Tianzhou-2 will fly to the front of the core module and turn to dock with the node. It will then test the node’s in-orbit refueling capability.

Compared to Tianzhou-1, Tianzhou-2 can maintain the attitude and orbit of the entire Tianhe-Tianzhou-2 combination, according to Dang Rong, deputy chief designer of Tianzhou-2 at the CAST.

“It’s like the brain is inside Tianhe and all the engines and propellant are in the cargo freighter, which can extend the space station’s service life by minimizing its power and energy consumption,” said Dang.

The rendezvous and docking technology is crucial for the construction of the space station.

Through launch and orbit adjustments, Tianzhou-2 entered its orbit basically consistent with Tianhe, and established communication with the core module.

The cargo ship then adjusted the relative attitude and distance between itself and the core module, inched closer to a distance of zero, and completed docking.

Chinese engineers equipped the spacecraft with high-precision acceleration measurement instruments, microwave radar and other equipment to ensure the accuracy of rendezvous and docking.

Tianzhou-1 mainly depends on ground instructions to finish the rendezvous and docking procedure.

In Tianzhou-2, the movement sequence has been program d in an autonomous rendezvous and docking system in advance, saving the time for inputting the instructions and transmitting them from the ground to the space.

With the system, Tianzhou-2 can use position information of the BeiDou Navigation Satellite System to realize long-range autonomous navigation computation for craft guidance and control.

Tianhe’s nodes can dock with up to three spacecraft at a time for short stays, or two for long stays, said Bai Linhou, deputy chief designer of the space station at the CAST.

Tianzhou-2, storing waste and human excrement, will eventually depart from orbit and burn up on reentry into the Earth’s atmosphere.

According to the CMSA, the Tianzhou-3 cargo craft and the Shenzhou-13 manned spaceship will also be launched later this year to dock with Tianhe, and another three astronauts will then begin their six-month stay in orbit.

After the five launch missions this year, China plans to have six more missions, including the launch of the Wentian and Mengtian lab modules, two cargo spacecraft and two crewed spaceships, for 2022 to complete the construction of the space station.

The history of space exploration in 15 images

The history of space exploration in 15 images

Skyrora gets €3 million from the European Space Agency

A Look at Bezos’ Space Plans

The new space race behind China’s mission to Mars

Remembering the crew of Soyuz 11, the only astronauts to die in space