▶️ Listen to this article now.

PRIEST RIVER — When Chris Naccarato was in the eighth grade, he remembers excitedly preparing for a model rocket launch in his science class.

His two older brothers had launched their model rockets the years before, and a young Naccarato was ready to go with his own when his plans were canceled for him. Mount St. Helens had erupted, the event was canceled, and he never got to launch a rocket — until his first year teaching fifth grade science in 1991.

“I told that story to my class my first year teaching and they said ‘Well, why can’t we go out in the field and launch them?’” he said.

That was the beginning of Naccarato’s fifth grade “Space Day” tradition, he said.

Naccarato runs a theme-oriented classroom, he said. At the beginning of the school year he teaches students about the basics of aeronautics with paper airplanes (which, he said, you can learn a surprising amount from) before moving on to drones and a drone challenge at the end of the second quarter. After that, students begin to transition from learning about land-based to space-based aviation.

The students prepare for weeks, and run the launch day based on Mission Control. They’re also required to meet certain ISAT testing goals as a class to participate in Space Day, Naccarato said.

Friday morning, students could be seen running back and forth from the dugouts to the launch site on the school’s baseball diamond, relaying information and helping set up launches.

“One [rocket] had a misfire and they just handled it so incredibly well and figured it out instead of getting rattled by it,” Naccarato said. “It was amazing to see that depth of their teamwork and to [see them] stick to their training.”

To add to the experience, students were also given special Mission Control uniforms in ash gray, an homage to the ash of Mount St. Helens that inadvertently started the program.

But the mission control training isn’t the only unique thing about Space Day. Over the past three decades, Space Day has welcomed a total of 23 different astronauts, and 45 visits from astronauts. On Friday, the students got to meet retired NASA astronaut and Idaho resident John Phillips.

Students love meeting the astronauts, Naccarato said, and the experience is something that sticks with them long into adulthood.

“When I meet one of my former students,” he said, “they tell me ‘I still have all my stuff, I have my shirt,I have my signed pictures.’”

Now entering his 30th year of teaching, two of the students at Friday’s event did the same job their parents had years earlier when they were in the same class.

“When I start seeing grandkids… then I’ll have to think about it,” Naccarato said with a laugh.

Seeing his students’ professionalism, teamwork and growth makes him proud as a teacher, he said, and hopeful to think about the doors it may open for some of his students.

This year, Space Day also included most of the sixth graders from the previous year’s class who hadn’t been able to participate in Space Day because of the pandemic.

“I didn’t want them to have that same feeling [I did in eighth grade],” Naccarato said. “I’m glad that they didn’t have to wait 30 years.” 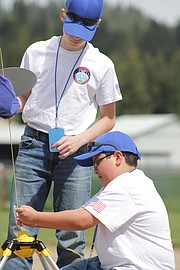 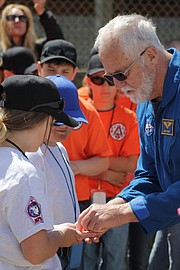 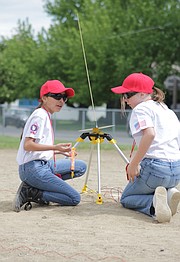 This Article firstly Publish on bonnercountydailybee.com

This is what it’s like to walk in space

This is what it's like to walk in space

Stars That Race through Space at Nearly the Speed of Light

Space-aged Wine Bottle Could Get $1 Million

ABL Space has never launched a rocket, but it just landed a huge contract