TOKYO — Few think that their backyards will ever be ground zero for junk falling from space, even after parts from one of the world’s largest rockets dropped near the Maldives this month, and from another that peppered the Ivory Coast last year.

Still, experts warn you may not always be so lucky. Debris from China’s Long March 5B rocket plummeted into the Indian Ocean on May 9, but it could have been anywhere in an area between 41.5 degrees north and south of the equator, given the orbit of the rocket, which was launched on April 29 to help develop China’s first permanent space station.

China has launched the most rockets in the last three years. In 2020, it made 39 orbital launches compared with 36 for the U.S. and 16 for Russia, according to Gunter’s Space Page. The combined launches from all countries have many concerned.

“Calls are expected to grow internationally for some kind of response to uncontrolled rocket reentries into the Earth’s atmosphere,” said Nobu Okada, CEO of Astroscale, a Tokyo-based space startup.

Astroscale specializes in removing space junk orbiting Earth as worries grow about debris harming satellites and astronauts. The issue really came to light after China caused an international outcry in 2007 by destroying one of its own satellites with a missile, adding more deadly fragments to those already circling the Earth and increasing total debris by 17%.

The reentry of a Long March 5B put the country on the spot again, but now over the issue of safe disposal of large rocket stages.

For some, the latest incident has underlined the need for a long-overdue update on international rules governing space. The Space Liability Convention of 1972, which holds launch countries responsible for damage and to which China is a signatory, needs to be revamped to reflect the realities of today. The promise of compensation to aggrieved parties is no longer enough: Countries are now expected to minimize accidents in the first place. The risk of rocket debris actually landing on a populated area is very small, experts say. But as the number of launches increases, risk will rise, they warn.

“As the number of orbital launches is expected to increase, we hope more countries will take appropriate steps,” such as requiring launch operators to take steps to minimize accidents, as the U.S., Europe and Japan have already done, Okada said.

Politics, however, could be an obstacle.

China and the U.S., are engaged in a fierce space race. On Saturday, China became the third country to land on Mars after the U.S. and Russia.

China is also building its own permanent space station with the help of a powerful fleet of rockets. The U.S., however, has no alternative plan for Earth orbit after the scheduled retirement of the International Space Station in 2024. Hence, China may see U.S. criticism of rocket debris as obstructionist rather than as a constructive safety suggestion, says Hiroaki Akiyama, a professor at Wakayama University who previously worked on Japanese space projects.

NASA said on May 9 that “It is clear that China is failing to meet responsible standards regarding their space debris.” Beijing countered the following day, with a foreign ministry spokesperson saying the U.S. is “hyping” the issue. “When it comes to China, the tune is completely different,” the person said. 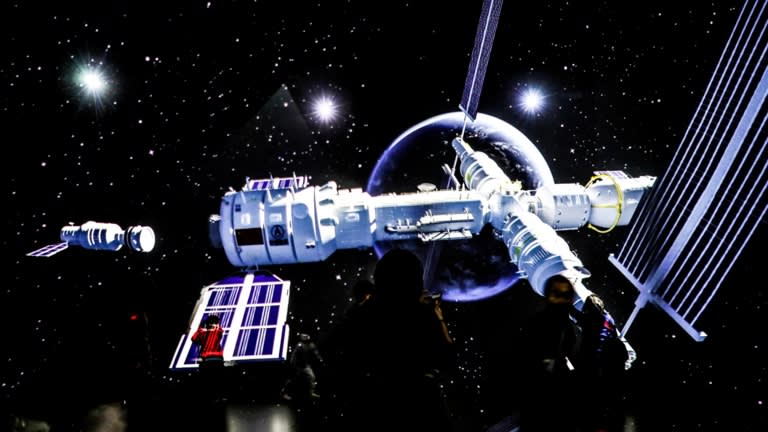 China is developing a space station, Illustrated above, while the U.S. faces uncertainty with its near-space plans after the retirement of the International Space Station.

Long March 5B is capable of attaining orbit using just one stage — an unusual feat in the space sector. The simple one-stage design has the advantage of being less costly than its multistage counterparts, but is tough to dispose of due to its size, Akiyama said.

Akiyama thinks it should not be too difficult for China to make the rocket fall into a pre-defined uninhabited area after use. “It wouldn’t take a major modification to the system,” he said. The rocket only needs to change direction with its main engine or thrusters after releasing the payload, he said.

Akiyama thinks China could make the changes before the next launch, presumably for delivering other modules of the space station later this year. But the prospects of the U.S. and China talking calmly is remote, given their mutual acrimony, he said. Third parties such as the EU, Russia, Japan or ASEAN may be in a better position to offer counsel, he said.

Another way to get China on board is through the United Nations, especially via its Committee on the Peaceful Uses of Outer Space (COPUOS), with which China engages closely, according to Setsuko Aoki, professor of international law at Keio University and a member of the National Space Policy Committee of Japan. COPUOS adopted voluntary guidelines on debris and other sustainability issues in 2019.

The guidelines call on member countries to use “design techniques to minimize the risk associated with fragments of space objects surviving uncontrolled reentry.” The committee is slated to hold meetings to flesh out guidelines. Recommendations from the committee could serve as “a mild warning” to China, Aoki said.

Astroscale’s Okada concurs. “Many private companies are actively involved in developing best practices for safe and sustainable space activities,” he said. “I hope the latest incident will spur countries to act on the U.N. guidelines.”


This Article firstly Publish on asia.nikkei.com

5 family-sized new launch units under $1.3m if you need space but are on a budget, Money News

5 family-sized new launch units under $1.3m if you need space but are on a budget, Money News

How to spot the International Space Station flying overhead throughout May

Bringing a Rocket Back from Space: Rocket Lab to Recover Electron Booster on Next Mission