The fourth-generation Skoda Fabia gets sharper looks and a more stylish, roomier interior that’s packed with the latest infotainment. The little hatchback shares its underpinnings with the rivalling Volkswagen Polo but will go on sale with a lower price tag — which we expect to be around £15,000.

In terms of design, the new Fabia has been brought more in line with the Scala, Kodiaq and Enyaq iV for a better family resemblance. The Peugeot 208 rival is 111mm longer than before (at 4108mm) and wider, at 1780mm. Its wheelbase has been extended to 2564mm to improve the space inside, especially in the rear. The 380-litre boot is also said to be the largest of any hatch on sale — including the impressively spacious SEAT Ibiza.

Slim, LED headlights (standard), new foglights and a reshaped bumper are the most obvious changes at the front, while optional LED brake lights and a more prominent spoiler.

There are just three trim levels (S, SE and SE L), all of which get new circular air vents and a multifunction steering wheel. Ambient LED lighting, heated steering wheel, heated windscreen and dual-zone climate control are available as options for the first time, too. 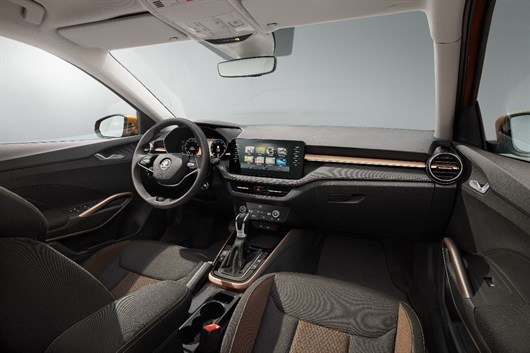 The car will have conventional dials and a 3.5-inch information screen as standard, but 10.25-inch digital instrument panels will be available as an option. There’s a choice of three different infotainment systems. Swing, the entry-level system, features a modern 6.5-inch colour touchscreen, a radio with digital DAB receiver and four front speakers as standard.

Bolero offers a radio, an 8-inch screen, a Bluetooth hands-free system and two additional surround-sound speakers in the rear doors. A smartphone can be connected without the need of a cable via Wireless SmartLink and Android Auto or Apple CarPlay, while the optional Phone Box enables inductive charging.

The range-topping Amundsen infotainment system features a customisable 9.2-inch display and a navigation function that’s backed by online data. This option also includes a Wi-Fi hotspot. A gesture control feature comes as standard, while voice control via the Laura digital voice assistant is optional. The new Fabia boasts up to five USB-C sockets for charging further mobile devices – one of which can be found on the rear-view mirror to charge a dashcam, for example.

When it comes to engines, the Skoda Fabia will be available with four 1.0-litre three-cylinder petrol engines and a single 1.5-litre four-cylinder petrol. The cheapest of the lot will be the 65 and 80PS MPI Evo engines, which do without a turbocharger. 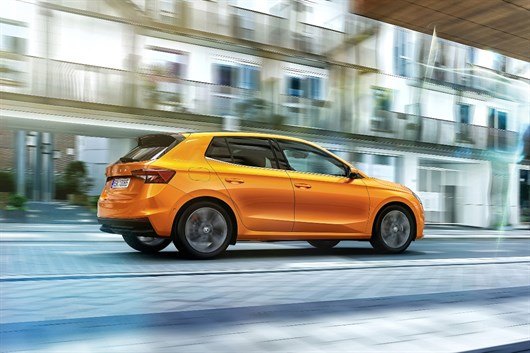 The 95PS TSI model, which does have a turbocharger, returns the same 55mpg fuel economy while getting from 0-62mph in 10.6 seconds. The 110PS version of the same engine is the first to come fitted with a six-speed manual gearbox as standard – all the cars below it get five speeds – which means it returns slightly better fuel economy of 56mpg, despite getting from 0-62mph in 9.7 seconds.

It is also available with a seven-speed dual-clutch automatic which slightly lowers fuel economy (51mpg) but makes the Skoda quicker off the line (0-62mph in 9.5 seconds).

Finally, there’s the 150PS 1.5-litre four-cylinder engine, which makes its debut in the Fabia having already been fitted in everything from the Volkswagen Arteon to the Audi A4 and SEAT Ibiza. It comes with the seven-speed dual-clutch fitted as standard, gets from 0-62mph in 7.9 seconds and returns 50mpg.

There will be a Monte Carlo version of the Fabia joining the range later, too, featuring sportier styling. The new Fabia is available with nine colours in all, including two metallic finishes – Graphite Grey and Phoenix Orange. Wheels, meanwhile, range from 15 to 18 inches.

Driver assistance systems include Travel Assist and Parking Assist, the first of which can accelerate, brake and steer the car for you using adaptive cruise control and lane assist features.

This Article firstly Publish on www.honestjohn.co.uk

Vakrangee enters the online space with the launch of Digital Services

Bezos vs. Branson: Another billionaire space battle is brewing

Can space exploration be environmentally friendly?

Want to Go to Space? These Agencies May Take You