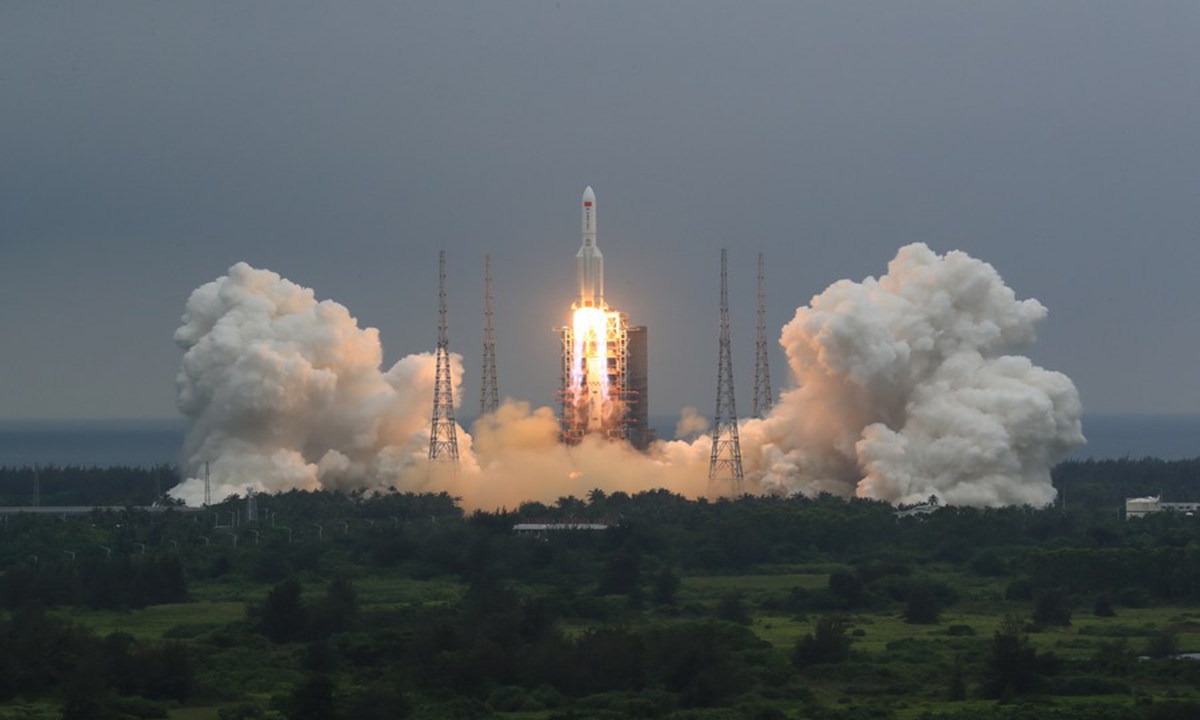 Wreckage from rocket launches falling back to Earth is common in the aerospace field, and the Pentagon’s reported claim that the rocket wreckage will fly back “out of control” and “may cause damage if it hits inhabited areas” is nothing but Western hype of the “China threat” in space technology advancement, observers noted.

The Long March 5B rocket is expected to re-enter Earth’s atmosphere around May 8, and the US Space Command is tracking the rocket’s trajectory, CNN reported on Tuesday, citing a statement from US Defense Department spokesperson Mike Howard.

Despite “worries” from the US Defense Department, industry insiders believe the situation is not worth panicking about. Jonathan McDowell, an astrophysicist at the Astrophysics Center at Harvard University, was quoted by CNN as saying the risk of being hit by the falling debris is “incredibly tiny.”

Song Zhongping, an aerospace expert and TV commentator, told the Global Times on Wednesday that it is “completely normal” for rocket debris to return to Earth.

Wang Ya’nan, chief editor of Aerospace Knowledge magazine, added that the development of rocket debris falling was carefully considered by China’s space authorities from the initial rocket design phase and the choice of a launch site, to the rocket’s liftoff attitude and its trajectory.

“Most of the debris will burn up during re-entry into the Earth’s atmosphere, leaving only a very small portion that may fall to the ground, which will potentially land on areas away from human activities or in the ocean,” Wang told the Global Times on Wednesday.

As China’s launch vehicle is mainly made of lightweight materials, most of it will be easily burned up by the dense air in the atmosphere following its high-speed re-entry, space insiders explained.

Song noted that China’s space monitoring network will also keep close watch on areas covered under the rocket’s flight course and take necessary measures if any damage would occur to passing ships.

Song further elaborated on the environmentally friendly fuel used by China’s Long March-5B Y2 rocket, which would not cause water pollution if the debris falls into the ocean.

“In all, it is another hyping of the so-called ‘China space threat’ adopted by some Western forces,” Song noted. “It’s an old trick used by hostile powers every time they see technological breakthroughs in China, as they are nervous.”

As long as China stays open and transparent to the international society, such rumors will be naturally smashed to pieces, Song said.

China kicked off an intense construction phase of the country’s first space station project with the launch of the Tianhe core module cabin on April 29. A busy schedule of 11 launches has been set for the next two years, and by 2022, the space station is expected to be operational.

Marking the final phase of China’s three-step manned space development, the extendable T-shaped station is set to be operational for 10 years and its life can be extended to 15 years with proper repair and maintenance, according to the China Academy of Space Technology.

It is expected to be the only operational station in orbit that will be open to foreign partners following the retirement of the International Space Station.

HUMOR COLUMN: This just in from outer space | Columnists

Experts warn of brewing space mining war among US, China and Russia

Brian Eno calls for space to be better protected

Debris Could Threaten Operations in Space – as Well as Earthbound Activities