MAINZ, Germany, May 4, 2021 — A German team successfully demonstrated atom interferometry in space on board a sounding rocket. Atom interferometry uses the wave character of atoms to make high-precision measurements. The application can be used to measure the gravitational field of Earth, for example, and to detect gravitational waves.

The team of researchers from multiple universities and research centers was led by Leibniz University Hannover. It launched the MAIUS-1 mission in January 2017, which became the first rocket mission on which a Bose-Einstein condensate was generated in space. According to Patrick Windpassinger, a professor at the Institute of Physics at Johannes Gutenberg University Mainz (JGU), the ultracold ensemble of atoms that the group cooled to achieve a Bose-Einstein condensate represented a promising starting point for atom interferometry. Temperature is one of the determining factors, because measurements can be made with more accuracy and for longer periods at lower temperatures. 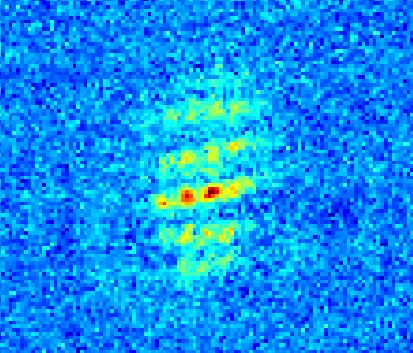 An example of an interference pattern produced by the atom interferometer. Courtesy of Maike Lachmann, Institute of Quantum Optics, Leibniz University Hannover (IQO).

In its experiments, the team used laser light irradiation to separate the gas of rubidium atoms. Subsequently, the team superpositioned the rubidium atom gas. Depending on the forces that acted on the atoms on their different paths, several interference patterns can be produced. In turn, those patterns can be used to measure the forces that influence them, such as gravity.

The study first demonstrated the coherence, or interference capability, of the Bose-Einstein condensate as a fundamentally required property of the atomic ensemble. To this end, the atoms in the interferometer were only partially superimposed by means of varying the light sequence, which, in the case of coherence, led to the generation of a spatial intensity modulation. The ability to achieve this spatial intensity modulation demonstrated the viability of the research team’s concept, which may lead to further experiments targeting the measurement of Earth’s gravitational field, the detection of gravitational waves, and a test of Einstein’s equivalence principle. The principle says that, in free-fall, the effect of gravity is totally abolished in all possible experiments, and general relativity reduces to special relativity, as in the inertial state.

Two more rocket launches, MAIUS-2 and MAIUS-3, are planned for 2022 and 2023, respectively. The team plans to use potassium atoms in addition to rubidium atoms on those missions to produce interference patterns. Comparison of the free-fall acceleration of the two types of atoms would allow the researchers to test the equivalence principle with previously unattainable precision.

That kind of experiment would be a future objective on satellites, the International Space Station (ISS), or even at the Bose Einstein Condensate and Cold Atom Laboratory (BECCAL), said André Wenzlawski, a member of Windpassinger’s research group at JGU, who is directly involved in the launch missions. The limited free-fall time aboard a rocket would not constrain achievable accuracy for such an experiment, and in such a case, Wenzlawski said.

BECCAL, a planned multi-user facility capable of performing experiments with cold atoms and Bose-Einstein condensates aboard the ISS, is a collaboration between the German Aerospace Center (DLR) and NASA. The collaborators plan to launch BECCAL in 2025.

This Article firstly Publish on www.photonics.com

Jeff Bezos Plans To Fly Into Space Soon. No One Willing To Insure Him

Interview with Astronauts on the International Space Station

Red wine in space may age faster than on Earth, study finds