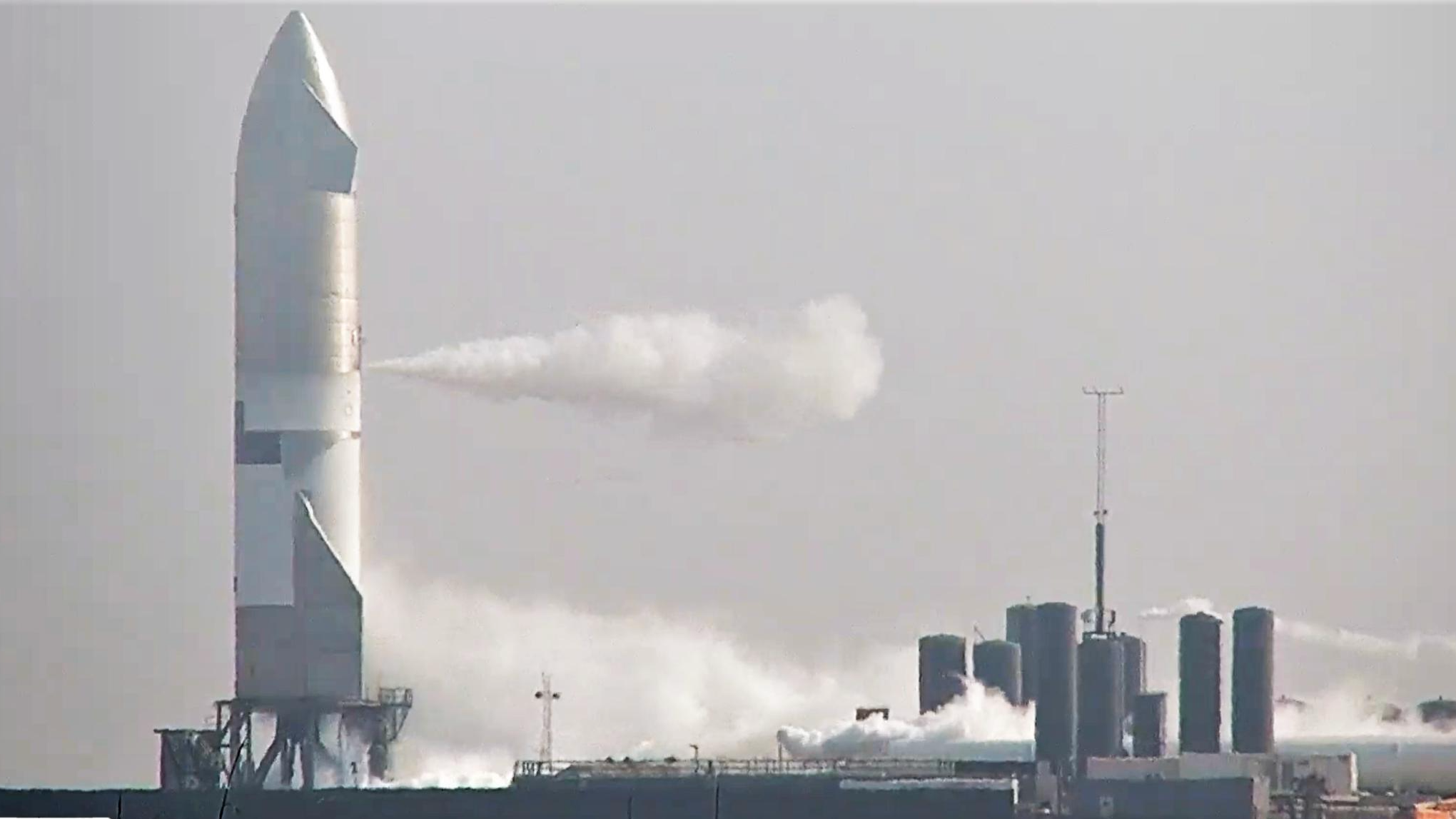 Starship prototype SN15 undergoing a cryogenic test earlier this month (April 2021) at SpaceX’s South Texas site. SN15 has been fitted with many updates, in hopes of preventing it from exploding, as have 4 earlier Starship prototype vehicles within the past 5 months. Image via SpaceX.

Update April 30, 2021: SpaceX will not perform the test flight of its Starship SN15 on Friday, April 30. The flight is scrubbed. The highly anticipated test launch has been awaited for several days. Poor weather conditions, including lightning, possibly caused the scrub.

SpaceX is developing Starship – which it calls a “fully reusable transportation system designed to carry both crew and cargo to Earth orbit, the moon, Mars and beyond” – and NASA has chosen this system as the moon lander for its crewed Artemis program. Artemis is intended to carry the first man since the 1970s, and first woman ever, to the moon in this decade. The final system will be paired with a giant SpaceX rocket booster known as Super Heavy. SpaceX has been testing its latest Starship prototype this week at its South Texas site, Starbase. The prototype – SN15 (Serial No. 15) – underwent its first static fire test on Monday, April 26, 2021, and a second static fire test on Tuesday. During those tests, the craft stayed on the ground while its three Raptor engines ignited briefly. But Starship isn’t designed to stay anchored to Earth. The big test is the high-altitude test, in which it’ll soar about 6 miles (10 km) upwards. That test flight has been looked for, especially toward the end of this week. But it has not yet occurred, and SpaceX has not officially announced a launch date.

You might find an update at this forum, via NasaSpaceflight.com

SN15 will be the fifth Starship prototype to attempt this upward flight in less than five months. The four before it – SN8 through SN11 – all flew well until the very end, when each exploded in a dramatic show of fire. See the amazing video comparison at the end of this post. SN10 landed in one piece, but blew up on the landing pad about eight minutes later. SN11’s launch took place about a month ago on March 30, soaring to its maximum altitude as planned, then exploding upon landing due to a “plumbing problem,” SpaceX founder and CEO Elon Musk announced a week later. Essentially, there was too much methane in the combustion chamber and the pressure was therefore too high.

And thus SN15 has had many “adjustments,” hopefully to keep it from exploding. SpaceX has built a reputation for persevering through failure, and it has the funds and resources to continue building prototypes and trying again. Both Starship and Super Heavy will be fully and rapidly reusable, potentially cutting the cost of spaceflight dramatically, Elon Musk has said.

SpaceX expects Starship to succeed eventually, and who could doubt it? They expect Starship and Super Heavy to be up and running soon. The date often mentioned for the final system to be fully operational is 2023. The Artemis program has the stated goal of returning humans to the moon – specifically to the moon’s south pole region – by 2024, although many believe that goal is not feasible.

According to Elon Musk, SpaceX’s reason for jumping from SN11 to SN15 is that it was built at the same time as SN12, SN13, and SN14, but with major improvements. For that reason, SpaceX engineers have decided to run with SN15 rather than finish building SN12–SN14, which the engineers already know are outdated at this point. It’s expected that a similar scrapping will happen with Starships SN18 and SN19. SN20 will likely have another set of major upgrades, and SpaceX currently has the ambitious goal of flying SN20 to orbit with Super Heavy before July.

SN15’s first static fire came just three days after the launch of Crew-2, SpaceX’s second operational crewed mission to the International Space Station (ISS) for NASA. The Falcon 9 rocket carrying a Crew Dragon capsule lit up the predawn skies over historic pad 39A at NASA’s Kennedy Space Center in Florida, blasting off at 5:49 a.m. Eastern (09:49 UTC; translate UTC to your time). It docked with the ISS early April 24.

The videos below show the awesome maneuverability and the explosive fates of some earlier Starship test flights, over the past few months. The first video was posted by IssueKitchen on YouTube, who commented:

Elon Musk will never give up.

Bottom line: SpaceX performed its second “static fire” test of Starship SN15 on Tuesday, April 27, 2021, in preparation for its high-altitude test flight, in which the vehicle will soar about 6 miles (10 km) upward. The high-altitude test, intended for Friday, April 30, was scrubbed likely due to bad weather and postponed until a future as-yet-unknown date.

Read more from EarthSky: Lift off! 4 astronauts in Crew-2 mission blast off to ISS