The core module for China’s first permanent space station, set for completion by the end of next year, blasted off from Earth on Thursday.

The launch represents the latest success for the country’s rapidly advancing space program.

Liftoff from island launch base

Chinese state television showed lift-off from the Wenchang Spacecraft Launch Site on the southern island of Hainan aboard a Long-March 5B rocket.

The craft carried the Tianhe (Heavenly Harmony) module, the first of at least three sections that will make up the Tiangong (Heaven’s Palace) space station.

Chinese Premier Li Keqiang watched blast-off from the mission’s control center in Beijing, along with other top civilian and military leaders.

Minutes later, the rocket structure opened to reveal the Tianhe with the Chinese characters for China, manned and space emblazoned on it.

Chinese President Xi Jinping sent a message of congratulations to staff. He said the launch represented the start of “an important leading project for constructing a powerful country in science and technology and aerospace.”

The rocket is expected to remain in space for about a week before it falls back to Earth. 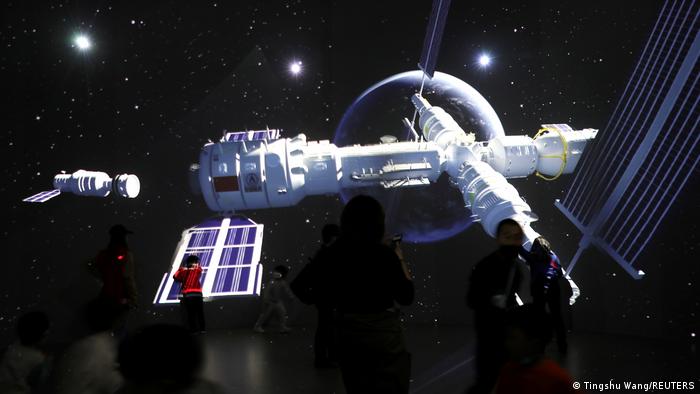 A further 10 launches will send up two more modules — where the crews will carry out experiments — four cargo supply shipments and four missions with crews on board.

The other two modules, Wentian (Quest for the Heavens) and Mengtian (Dreaming of the Heavens)’ will provide space for the crew to carry out scientific experiments.

It’s expected that the next two launches will follow in close succession, including a blast-off for the cargo spacecraft Tianzhou 2 (Heavenly Ship 2) in May. The first crewed mission, Shenzhou-12, is expected to be launched by June.

A three-person crew is to live there onboard the station — which has an expected life span of about 10 years — for six months at a time.

At least 12 astronauts are training to fly to and live on Tiangong, including veterans of previous spaceflight flights. There will also be female taikonauts.

How does Tiangong compare to the ISS?

The T-shaped space station’s three modules weigh about 66 metric tons, which makes Tiangong considerably smaller than the International Space Station (ISS) at about 420 tons. It could, however, be expanded to as many as six modules.

The station will be about the same size as the US Skylab space station of the 1970s and the former Soviet/Russian Mir, which operated from 1986 to 2001.

China has previously sent up prototype space stations, with the launch of a space lab Tiangong-1 in 2011, and Tiangong-2 in 2016.

The country began working on the project in 1992, being forced to go it alone when it was excluded from the ISS because of US objections. Washington claimed that the Chinese space program was too secretive and that it was too closely tied to the military.

The ISS — a collaboration involving the US, Russia, Canada, Europe and Japan — is due to be retired after 2024. NASA has said the station, launched in 1998, could potentially remain functional beyond 2028.

When the ISS does stop operating, Tiangong could become the only space station in Earth’s orbit.

While Beijing has no specific plans for international cooperation, it has said it is open to foreign collaboration. The European Space Agency has already sent astronauts to China for training to work aboard the Chinese station.

Russia wants to build its own space station to replace the ISS, state officials say

Inspired by Tim: How space inspired a generation

Incredible footage shows what Vancouver looks like from space (VIDEO)

We could see as many satellites as stars in our sky by 2030 due to space junk; ITV News

Space news: US, UAE and China head for Mars this month in battle for galactic supremacy | Science | News