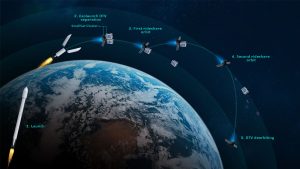 According to the company, this features a new orbital transfer vehicle (OTV) – dubbed Reliant – that will launch satellites to custom orbits in an “environmentally responsible way”. It addresses issues around satellite performance, payloads, capacity and execution of orbital maneuvers.

Its space tug testing and flight qualification will begin in 2022 on SpaceX’s Falcon 9 rideshare missions, it says.

“The Standard configuration is optimal for moving satellites to a custom orbit altitude after they’ve been deployed from a launch vehicle on a set rideshare orbit. For example, the utilized propulsion system allows to lift the orbit from 250-300 km to 550 km in one hour, greatly expanding the reach of existing missions to the small satellite community.”

A Pro configuration is equipped with a hybrid propulsion system, which combines the “green” propulsion (Exolaunch has a strategic partnership with Hyimpulse for its paraffin and liquid oxygen propellant) and an electric system. The Reliant Pro enables customers to change the orbit altitude and also adjust the inclination, LTAN/LTDN and perform orbital phasing for satellite constellations.

Additionally, it is designed to deorbit in less than two hours after deployment completion, minimising the risks of space collisions and reducing orbital debris, says Exolaunch.

“There is an increased demand from our customers and the NewSpace industry for dedicated injection and custom orbit in their constellation deployment programs, but until now they’ve been limited to one orbit per launch,” said Jeanne Medvedeva, Vice President of Launch Services at Exolaunch.

“Our space tug program will now offer customers multiple orbit options for smallsat deployments on any given mission, enabling wider access to space and diverse constellation launch strategies. It is also our contribution to the capacity-building of in-space logistics, a new emerging niche that is gaining value in the Exolaunch portfolio.”

Exolaunch, which was founded by scientists and engineers from the Department of Space Technology at the Technical University of Berlin in 2010, has coordinated launches for 140 small satellites. 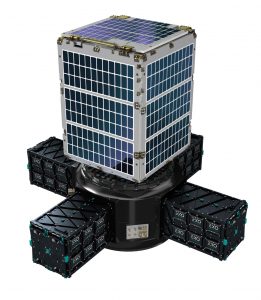 
This Article firstly Publish on www.electronicsweekly.com

One hull crack located in ISS, another one suspected – Science & Space

Northrop Grumman will launch a Cygnus cargo craft to the space station today. Watch it live!

Russia And China Versus US And Its Partners In New Tech-Focused Space Race? Bring It On

For All Mankind S2: Come for the alternative space timeline, stay for the character drama [Interview]