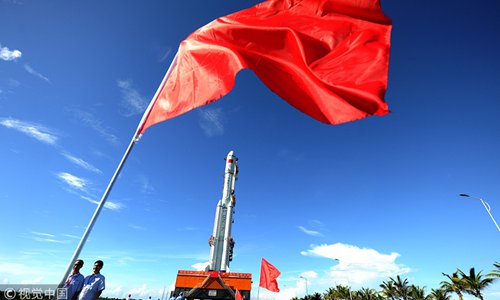 Both the launch vehicle and the cargo spacecraft commissioned for construction missions of China’s first-ever space station have arrived at the Wenchang Space Launch Center in South China’s Hainan Province, waiting for a window period for the launch.

China Manned Space Engineering Office (CMSEO) announced Monday that the Long March-7 Y3 carrier rocket and the Tianzhou-2 cargo spacecraft have arrived at the launch center in the tropical province.

This mission is expected to be launched after the Long March-5B Y2 rocket and the Tianhe core cabinet module of the space station, which have also entered pre-launch phase and are undergoing assembly and testing at the launch pad at the Wenchang launch center.

As people from all over the world celebrate International Day of Human Space Flight 2021, which is observed globally on Monday to mark the 60th anniversary of Soviet cosmonaut Yuri Gagarin’s first manned flight into space, the world’s first, the progress for China’s space station construction missions has added to the worldwide excitement of human space voyage.

According to a press release the CMSEO provided to the Global Times on Monday, the facility at the Wenchang Space Launch Center is in good condition, and all systems involved in the testing work are proceeding as planned.

To be more exact, Zhou Jianping, chief designer of China’s manned space program, told the Global Times in December 2020 that the very first mission of the space station construction could be expected by 2021 spring.

Some foreign space lovers have posted on social media, predicting that such launch could take place as early as late April.

China is the third country in the world to achieve a manned space mission independently, following the Soviet Union/Russia and the US.

On the upcoming building of China’s space station which is expected to be operational by 2022, Andrew Jones, a Finland-based space observer who follows China’s space industry, told the Global Times that “It’s quite something that China can set out a goal like this in 1992 and slowly work towards this technological feat.”

Moments of milestone events in China’s manned space missions are also treasured deep inside many Chinese people’s hearts and have become a source of pride.

Earlier on Monday, a video documenting the 11 Chinese astronauts, including two women, and their successful flights in space, has gone viral on China’s social media platform, gathering nearly 200 million views and more than 30,000 comments.

There will be 12 more Chinese astronauts flying into space within two years, the People’s Daily said in a Sina Weibo post featuring the video. The post also listed names and contributions of the 11 astronauts, as well as the first generation of Chinese astronauts who failed to make it to space.

Among these 11 astronauts, Yang Liwei, the first one sent in space by the Chinese space program in October 2003 with Shenzhou 5, impressed the Chinese web users the most.

Besides Yang, netizens also focused on two female astronauts. One is Liu Yang, the first Chinese woman in space in Shenzhou 9 in 2012, and the other is Wang Yaping.
Wang conducted scientific experiments and taught a physics lesson to Chinese students by a live television broadcast when she served as a member of the Shenzhou 10 spaceship crew in 2013.

“Female astronauts can finish the space mission well as men do. I hope we can see more women in space,” one netizen said on Sina Weibo.

Some netizens said the scenes of Chinese astronauts in space broadcast on TV became one major factor to inspire and stimulate them to throw themselves in the space career.

“China’s space missions are mainly for peaceful purposes and fruits of development can be shared with others, to offer great help to the progress of space technology, which is different from the US’ space technology that mainly serves the military,” Song Zhongping, an aerospace expert and TV commentator, told the Global Times.

Song added that when China’s manned space station is completed, China will become a developed country in the aerospace sector capable of carrying out long-term manned operations in orbit and a variety of space experiments.

How the human eye changes after 1 year in space

These stocks could appear in Ark Invest’s new space ETF