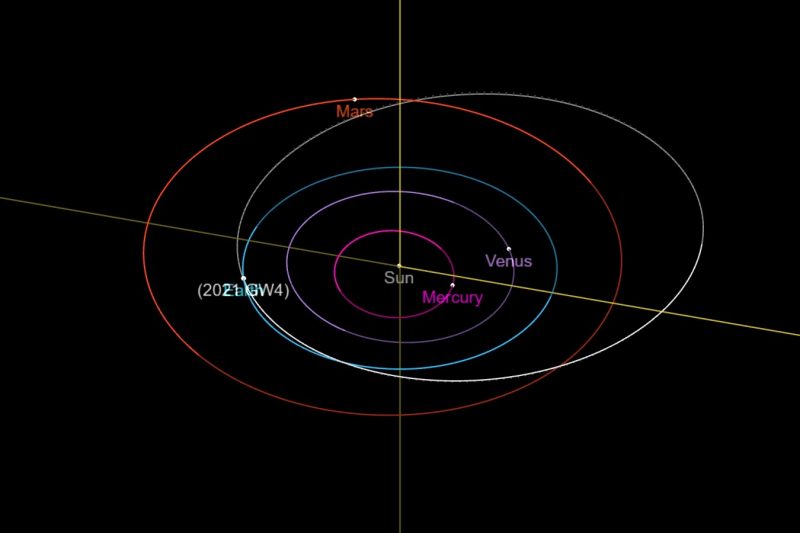 A recently detected space rock will pass by our planet on Monday, April 12, 2021. It’ll come extremely close, far closer than geostationary satellites orbiting some 22,000 miles (35,786 km) above Earth. The small asteroid has been designated as 2021 GW4. It is estimated to be about 16 feet (5 meters) in diameter. It’s a small space rock, and there’s no risk of impact, astronomers say. NASA/JPL calculations indicate asteroid 2021 GW4 will pass at just 12,313 miles (19,816 km) from Earth’s surface, which is about 5% the Earth-moon distance.

The space rock is traveling at 18,706 miles per hour (30,104 km/h) or 8.36 kilometers per second, relative to Earth. The closest approach of asteroid 2021 GW4 will occur at about 13:00 UTC (during the day for the east coast of North America; translate UTC to your time) on Monday, April 12. Amateur astrophotographers might try to capture the space rock on Sunday night (April 11) as the asteroid will be passing very close to where we see the galaxy Messier 95, in the direction of the constellation Leo the Lion, as seen from our perspective.

The space rock will not be visible to the unaided eye, but should be within the reach of telescopes with cameras. 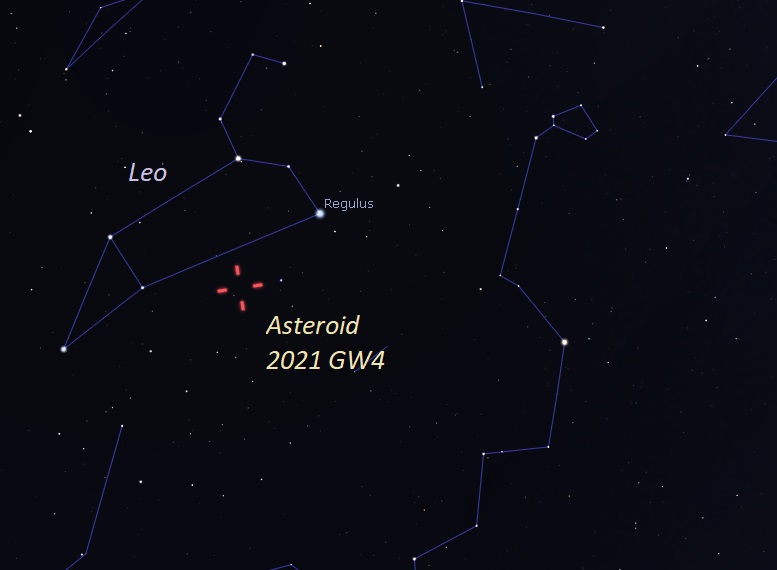 Location of asteroid 2021 GW4 – with respect to the constellation Leo the Lion – on the night of Sunday, April 11, 2021, as seen from the U.S. Illustration by Eddie Irizarry using Stellarium.

Around mid-evening on Sunday, April 11 (that is, around the time midway between your local sunset and midnight), the van-sized asteroid will be located very close to the group of galaxies of Leo. However, the space rock will be passing so close to our planet that astrophotographers located at different latitudes will “see” the space rock slightly closer or farther from Messier 95, an effect known as parallax, caused by the distinct perspectives and closeness of the object.

In fact, observers located at latitudes close to Earth’s equator might capture asteroid 2021 GW4 passing in front of M95, while observers in the U.S. should capture the space rock passing just below that galaxy. 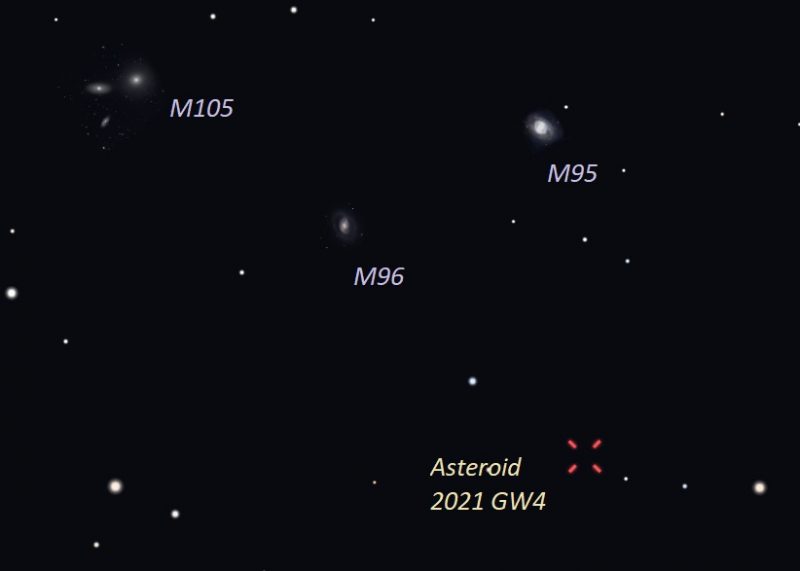 Have a computerized or “GoTo” telescope? Point your instrument at the galaxy Messier 95 on the night of Sunday, April 11, 2021. Around 10 p.m. to 10:45 p.m. Eastern time, asteroid 2021 GW4 will be located extremely close to where we see these galaxies, and the space rock should appear as a small streak in images of a few seconds or minutes of exposure. Illustration by Eddie Irizarry using Stellarium.

Bottom line: A small asteroid designated 2021 GW4 will pass extremely close to Earth on Monday, April 12, 2021. It’ll pass just 12,313 miles (19,816 km) from Earth’s surface, which is about 5% the Earth-moon distance. Amateur astronomers using telescopes can see it shortly before closest approach passing the galaxy Messier 95 on the night of Sunday, April 11.

DoD space agency: Cyber attacks, not missiles, are the most worrisome threat to satellites