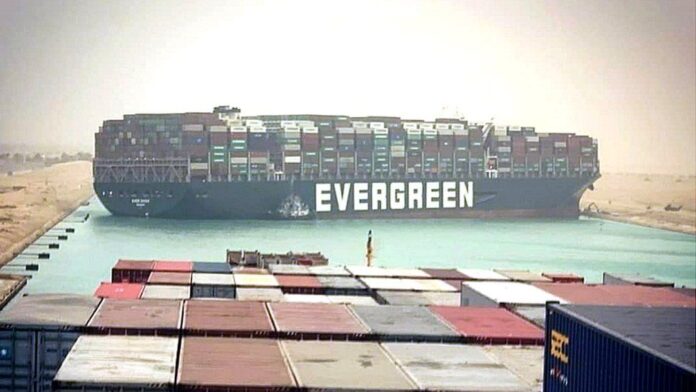 The Ever Given, a 200,000-tonne Panama-flagged ship, owned by Shoei Kisen KK, on the 23rd of March 2021, on its way through one of the busiest trade routes on the planet, the Suez Canal, Egypt, ran aground and was consequently wedged on the side of the canal, blocking the trade route, subsequently causing a pile-up of ships intending to ply the same route. The Canal in question is spectacularly important as it connects the Mediterranean sea with the Red sea, which provides a highly congested route for goods between Asia, Europe and the rest of the world.

This gridlock led to a coordinated hustle and bustle to set the container ship adrift. This included around the clock attempts to free the giant ship from the canal – with some nine tugboats, two specialised suction dredgers, and diggers to release the propeller from the sediment that affixed the vessel to the banks of the Canal. This response was necessitated because the impasse spelt unparalleled financial losses for the global shipping market – SCA chairman Osama Rabie opined that the Canal’s revenues were taking a $14m-$15m (£10.2m-£10.9m) hit for each day of the blockage.
After a week of coordinated wedging and pulling, the massive container ship was successfully set adrift again on the 29th of March 2021.
After the above, Africa has learned one or two lessons from the incident, one of which is the continued importance of space technology in optimising African endeavours.

In discussing the relationship between the Ever Given incidence, and space technology, we must first consider whether space technology could have prevented the incident. While it is generally believed that the causes of the incidence would be clearer upon conclusion of investigations, it has been opined by the owners of the ship that high winds in a sandstorm pushed the ship sideways, wedging it into both banks of the waterway, with containers stacked on deck possibly acting as a sail.
In this regard, environmental satellites possess the important ability to monitor environmental phenomenon on the earth’s surface from a unique bird’s eye perspective. This ability enables these satellites to provide reliable data 24 hours a day, on Temperature, wind speed and direction, cloud cover, storms, and tropical cyclones, amongst other atmospheric phenomena that can affect the weather, and in the case of the Ever Given, predict a sandstorm on the Suez Canal.
Recourse to data provided by environmental satellites may have informed the ship’s conductors of an impending atmospheric phenomenon capable of impacting the journey through the African canal.

The second consideration as it relates to the aforementioned incidence is how space technology positively optimized and aided the process of setting the container adrift, thus reopening the African trade route.
Chief amongst the usefulness of space technology in the freeing of the ship was its use in observing the tide system of the canal and subsequent prediction of the next high tide. Experts on the scene of the incident employed the high tides to float the Ever Given after it had run aground. This step proved important in the freeing of the vessel. Certain satellites employing radar altimetry sensors measure the time a signal takes to bounce off the ocean surface and return to the satellite, providing global sea surface height measurements. This process is important for determining, with impeccable accuracy, the earth’s earth’s tide system and,, subsequently, any water body.
Furthermore, satellite imagery was employed in the observation of the incident and the subsequent pile-up of containers at the edge of the canal in a bid to understand the situation better. Some of these important pictures include

Images like the above showed Africa, the extent of the incidence, aiding an understanding of what was at stake.

The picture below also typifies the importance of space technology with regard to monitoring the gradual and often infinitesimal progress of the excavation, dredging and floating progress. Images like this help the team understand their present situation in a bid to determine the best next steps to take. 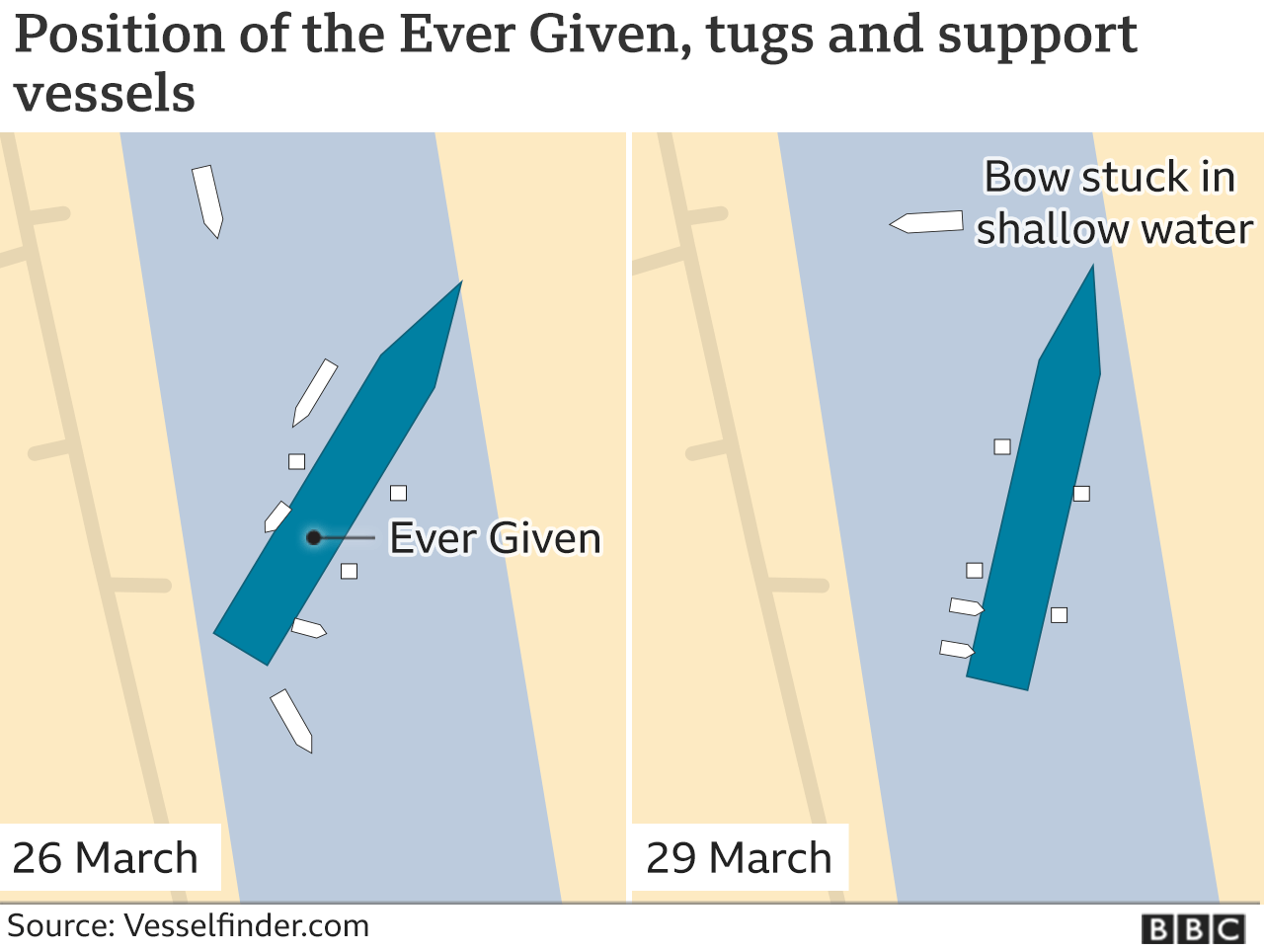 Having considered the above, the next natural step is considering how space technology may be used to forestall such future occurrences in Africa and the world at large.
Knowledge of the cause of an occurrence is the first step in developing a plan to forestall such future occurrence. In this case, the preliminary cause is said to be high winds occasioned by sandstorms. Earlier in this article, use of space technology in preventing a similar outcome in the future has been discussed. Upon completion of investigations regarding the cause of the incidence, such concluded reason will likely be preventable by the application of space technology.
Furthermore, concerning potential shipping risks, such as adverse weather conditions, unfriendly ocean currents, amongst others, application of space technology, such as environmental satellites, etc., may be used to identify such risks well in time to begin evasive procedures before it becomes too late. This is because any evasive manoeuvres must be done far in advance to ensure the ship has enough horsepower to make the move in time.

The unfortunate impediment of global trading, by the Ever Given predicament, is rightly a source of worry. It may take months before the consequences are resolved. Experts have also raised the concern at the possibility of a negative effect on the oil market, which will invariably kick-start a temporary but significant increase in the cost of other goods. However, the article explored the positive application of space technology on African soil, and it is apparent that such application played a crucial role in the resolution of the Ever Given mess. The usefulness of Space Technology on African soil is significant, and the above is an example of why.

This Article firstly Publish on africanews.space

ABL Space has never launched a rocket, but it just landed a huge contract

NASA once again needs Russian help to get into space – BGR

A uranium company making waves in the rare earths space

Mars Horizon review: Fantastic simulator gets you into the space race

No one is talking about remote work from space – TechCrunch