Is the Hyades star cluster being destroyed? | Space 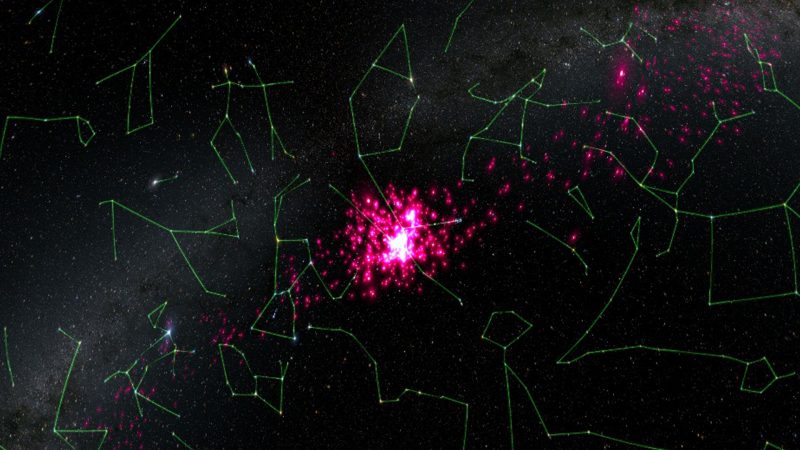 The famous Hyades star cluster – face of the Bull in the constellation Taurus – is gradually merging with the background of stars in the Milky Way, according to a new study based on Gaia satellite data. In this image, the Hyades stars are marked in pink, and the shapes of the various nearby constellations are traced in green. Gaia revealed that stars from the Hyades stretch out from the central cluster to form 2 “tails.” These tails are known as tidal tails; through them, stars leave the cluster to merge with the Milky Way at large. The image was created using Gaia Sky. Image via ESA/ Gaia/ DPAC/ CC BY-SA 3.0 IGO/ S. Jordan/ T. Sagrista.

The Hyades star cluster is an easy-to-find, V-shaped asterism within the constellation Taurus the Bull. Aldebaran, one of our sky’s brightest stars, appears as part of the V. Telescopes reveal 100 or so fainter stars in the Hyades, contained in a space roughly 60 light-years across. Stargazers know that, unlike other noticeable patterns on our sky’s dome, most visible stars in the Hyades (Aldebaran excluded) are bound gravitationally. They’re like a family, made of stars born together and now moving together through space. This month, scientists announced that this cluster is being disrupted by the gravitational influence of a massive but unseen structure in our galaxy. If true, the Hyades’ distinctive V shape won’t last long, on an astronomical timescale. What’s more, if true, then the beloved Hyades – one of the best-known patterns in the night sky – might provide evidence for a suspected population of dark matter sub-halos. Wow!

The data for this new research came from the European Space Agency’s Gaia star-mapping satellite. If you’re not aware of this satellite, keep an eye out for it. Its results so far – from three separate data releases – have been fascinating. The new results were published online by Astronomy and Astrophysics on March 24, 2021.

You may know that dark matter is unseen matter in our universe. Dark matter sub-halos are smaller units of dark matter – discussed by scientists in recent years – that might sometimes clump together. These astronomers said:

Dark matter sub-halos [are] invisible clouds of particles thought to be relics from the formation of the Milky Way, and are now spread across the galaxy, making up an invisible substructure that exerts a noticeable gravitational influence on anything that drifts too close. 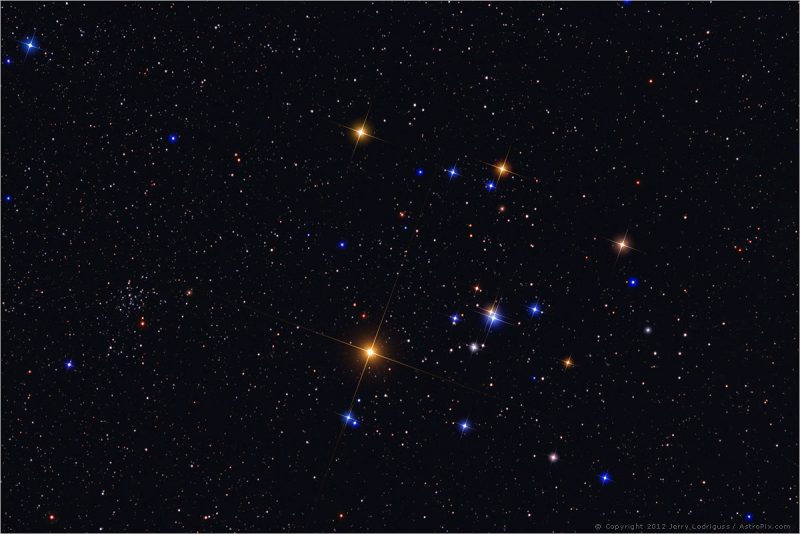 The Hyades star cluster – Face of the Bull in Taurus – displaying its V-shaped pattern, which points to the right in this photograph. The brightest star here – an orange star – is Aldebaran, the Bull’s fiery Eye. Copyright Jerry Lodriguss/ AstroPix.com. Used with permission. Read more about the Hyades. 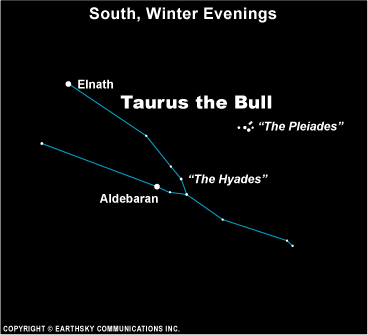 The Hyades star cluster can be found easily on January and February evenings, and is edging toward the western half of the sky by March and April evenings. It has the shape of the letter V. The brightest star in the V is Aldebaran. The small dipper-shaped Pleiades star cluster is nearby.

That includes, apparently, the Hyades, which are an open star cluster, open in the sense that they’re only loosely bound. Stars can come and go from the cluster. But these comings and goings occur in a way that’s more organized that most of us realized. Astronomer Tereza Jerabkova and colleagues from ESA and the European Southern Observatory (ESO) studied the way that the Hyades is merging into the general background of stars in our galaxy. They said a star cluster will naturally lose stars because as those stars move within the cluster they tug at each other gravitationally, and that:

… This constant tugging slightly changes the stars’ velocities, moving some to the edges of the cluster. From there, the stars can be swept out by the gravitational pull of the galaxy, forming two long tails.

One tail trails the star cluster, the other pulls out ahead of it. They are known as tidal tails, and have been widely studied in colliding galaxies, but no one had ever seen them from a nearby open star cluster until very recently.

This recent study revealed that – not only does the Hyades cluster sport tidal tails – but, the study indicates, it’s through the Hyades tidal tails that stars leave the cluster to merge with the Milky Way at large. 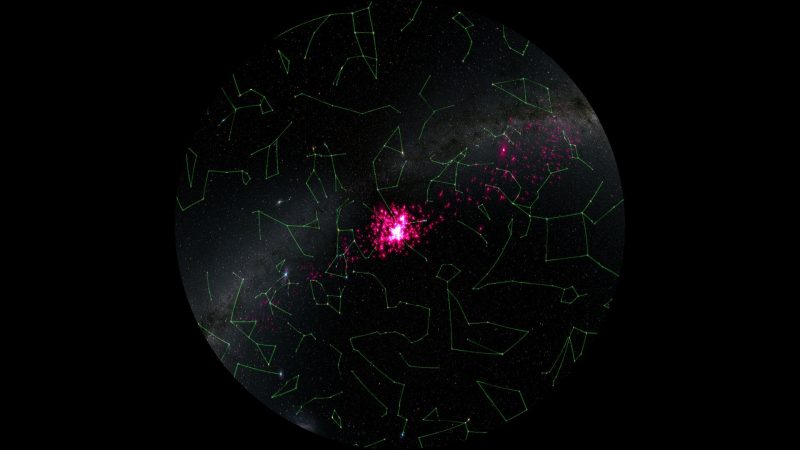 The true extent of the Hyades tidal tails have been revealed for the first time by data from the ESA’s Gaia mission. The Gaia data has allowed the former members of the star cluster (shown in pink) to be traced across the whole sky. Those stars are marked in pink, and the shapes of the various constellations are traced in green. The image was created using Gaia Sky. Image via ESA/ Gaia/ DPAC, CC BY-SA 3.0 IGO/ S. Jordan/ T. Sagrista.

The team said they chose the Hyades as their target because, with the exception of the Ursa Major Moving Group, the Hyades cluster is also the closest star cluster to Earth. It is 153 light-years away.

They used data from Gaia’s third data release (EDR3) and also data from its second release.

They said the key to detecting tidal tails is spotting which stars in the sky are moving in a similar way to the star cluster. Gaia makes this easy, they said, because it is precisely measuring the distance and movement of more than a billion stars in our galaxy. Jerabkova said in a statement:

These are the two most important quantities that we need to search for tidal tails from star clusters in the Milky Way.

The Hyades is an easily recognizable star cluster in the night sky. The brightest handful of stars define the face of Taurus the Bull. Telescopes show that the central cluster itself contains many hundreds of fainter stars in a spherical region roughly 60 light-years across. Previous studies have shown that stars were “leaking” out of the cluster to form 2 tails that stretch into space. Gaia has now allowed astronomers to discover the true extent of those tails by tracing former members of the Hyades across the whole sky. The animation was created using Gaia Sky.

Previously, other astronomers had tried to find stars leaving the Hyades cluster by looking for stars that closely matched the cluster’s movement through the galaxy. These attempts weren’t very successful, however, in part because they excluded members that left earlier in the Hyades’ 600-700 million year history and so are now traveling in different orbits.

To understand the range of orbits to look for, Jerabkova said she constructed a computer model that would simulate the various perturbations that escaping stars in the cluster might feel during their hundreds of millions of years in space:

It was after running this code, and then comparing the simulations to the real data that the true extent of the Hyades tidal tails were revealed.

Jerabkova and her colleagues said they:

… found thousands of former members in the Gaia data. These stars now stretch for thousands of light years across the galaxy in two enormous tidal tails.

But the real surprise, the astronomers said, was that the trailing tidal tail seemed to be missing stars. We think of an open star cluster like the Hyades – this family of stars born together and moving together through space – as gradually “dissolving” into the larger space of the galaxy. But, these astronomers said, the lack of stars in the trailing tidal tail indicates something much more “brutal” is taking place.

Running the simulations again, Jerabkova showed that the data could be reproduced if that tail had collided with a cloud of matter containing about 10 million solar masses. She said:

There must have been a close interaction with this really massive clump, and the Hyades just got smashed.

Located 153 light years away, the Hyades is between 600 and 700 million years old. During that time, stars have been “leaking” out of the central cluster to form 2 tidal tails that stretch across space. Gaia data has now allowed these tails to be traced across the whole sky, and a mystery has been uncovered. The tails should contain roughly the same number of stars as each other but there are many more stars in the leading tail than in the trailing one. This simulation shows why that might be true. The left panel shows a schematic of the Milky Way galaxy. The Hyades star cluster is shown in yellow. The right-hand panel shows a close-up of the cluster. The gray spots show clumps of matter in the Milky Way. These could be molecular clouds, other star clusters, or clumps of dark matter termed sub-halos. As time passes, the Hyades and the other clumps orbit the center of the galaxy. Close to the end of the simulation, one of the clumps passes through one of the Hyades tidal tails, scattering stars out of the tail.

What could that clump be? The astronomers noted there are no observations of a gas cloud or star cluster that massive nearby. They said:

If no visible structure is detected even in future targeted searches, Tereza suggests that object could be a dark matter sub-halo. These are naturally occurring clumps of dark matter that are thought to help shape the galaxy during its formation.

Thus, according to these astronomers, the new work shows how Gaia is helping astronomers map out this invisible dark matter framework of the galaxy. Jerabkova commented:

With Gaia, the way we see the Milky Way has completely changed. And with these discoveries, we will be able to map the Milky Way’s substructures much better than ever before.

Jerabkova and colleagues said they’re now extending their work by looking for tidal tails from other, more distant star clusters.

Bottom line: Gaia spacecraft data revealed that stars from the famous Hyades star cluster – a V-shaped cluster in the direction of our constellation Taurus the Bull – stretch out from the central cluster to form two “tails.” From these tidal tails, according to this study, stars leave the cluster to merge with the Milky Way at large.

Irish-built microgravity device to be blasted into space