The International Space Station is 20 and going strong | Space 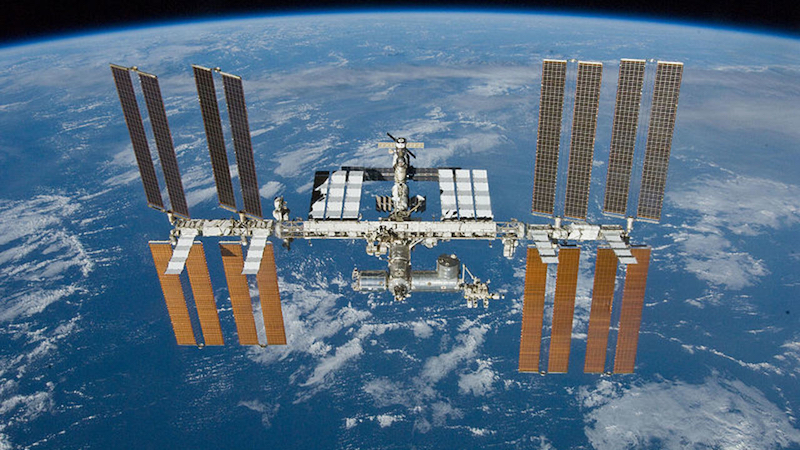 The International Space Station orbits Earth about every 90 minutes. Image via NASA.

It was 20 years ago this month that astronaut William “Bill” Shepherd and cosmonauts Yuri Gidzenko and Sergei Krikalev became the first people to step aboard the International Space Station (ISS). That first crew resided onboard the station for several months. Since then, ISS has been continuously inhabited for more than two decades, growing from a small residence to a sprawling collection of laboratory modules, research platforms and crew living quarters. ISS has provided a platform for living and working for hundreds of men and women from countries around the world and figures prominently in the current list of duration-in-space records.

EarthSky lunar calendars are back in stock! We’re guaranteed to sell out – get one while you can. Makes a great gift!

ISS is a collaboration between the United States, Russia, Canada, Japan and the participating nations of the European Space Agency. Although the first piece of the ISS – a module named Zarya – reached orbit in 1998, it took another two years for the first permanent crew to arrive at the station on November 2, 2000.

For Bill Shepherd and the two cosmonauts who made up Expedition 1, entrance into the early station marked the beginning of an unprecedented era of peaceful cooperation in space, paving the way for spacemen and spacewomen to conduct science in the name of benefiting humankind. Work on the space station also furthers space exploration for NASA’s Artemis program to land the first woman and next man on the moon in preparation to continue on to Mars.

Highlights of the space station’s history, as recalled by NASA, include:

– The primary pieces of the space station were delivered on 42 assembly flights: 37 on U.S. space shuttles and five on Russian Proton/Soyuz rockets. Elements were constructed independent of one another around the globe and assembled for the first time in space.

– The space station took 11 years to fully construct. Its current configuration measures 357 feet (109 m) end to end with a mass of nearly 1 million pounds (roughly 454,000 kg). Elements of the space station are continually added and reconfigured.

– There have been 221 spacewalks for space station assembly, maintenance and upgrades.

– It took a collaborative effort by 15 nations to construct the space station in orbit, and that collaboration continues today. The principal space agencies are the United States’ NASA, Russia’s Roscomos, the European Space Agency, the Japan Aerospace Exploration Agency, and the Canadian Space Agency.

– 239 individuals from 19 countries have visited or enjoyed extended stays on the space station.

– Gennady Padalka holds the record for cumulative days in space by an astronaut at 879 days.

– Christina Koch holds the record for longest duration by a woman astronaut at 328 days.

– Valery Polyakov holds the record for longest single spaceflight by an astronaut at 437 days, whereby his combined space living is more than 22 months.

– More than 2,700 investigations have been conducted on the space station from 108 different countries. 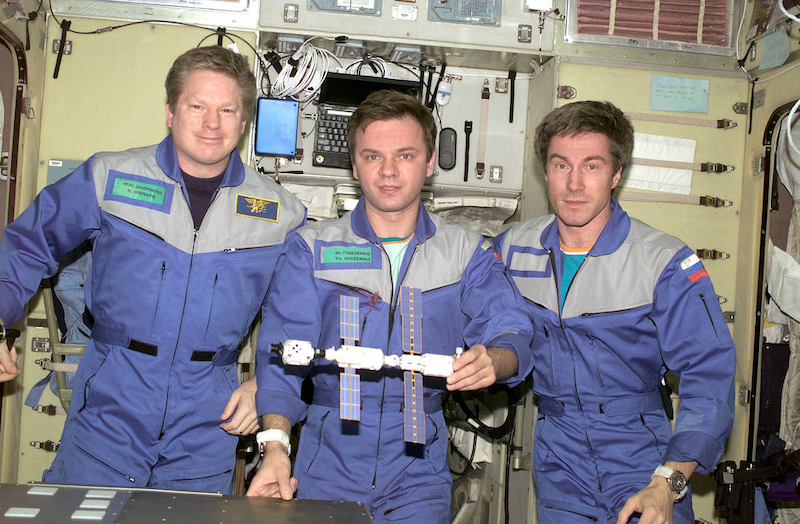 In this photo, Expedition 1 crew members (from left to right) Commander Bill Shepherd, and Flight Engineers Yuri Gidzenko and Sergei Krikalev pose with a model of their home away from home. Image via NASA.

Around 250 scientific investigations are being conducted on the station at any given time, while an expedition astronaut’s usual stay aboard the orbiting laboratory is six months. The space station also serves as a test bed for innovative technologies like recycling waste plastic and carbon dioxide filtration, which are critical for long-duration missions like the Artemis program.

Other impactful tasks include shooting millions of photographs, not only for the beautiful views, but as a scientific job, and – on each mission – one of the astronauts is trained to do so. Every photograph is valuable because it might be inspirational and/or scientifically useful. ISS images have revealed Earth’s geography, and its human impacts including the growth of cities. The images also document transient events such as storms, floods, fires, and volcanic eruptions.

Crew member safety also is important for lunar missions, so data collected from bone scans and eye exams helps inform what happens to the human body in space. State-of-the-art facilities onboard ISS help NASA increase our understanding of what it will take to expand human exploration beyond low Earth orbit, while microgravity research into protein crystal growth and fiber-optic cables offers scalable commercial opportunities and benefits for humanity. The space station has expanded these efforts to open for a self-sustaining commercial economy in low-Earth orbit, where NASA and other government agencies from various nations would serve as part of a community of international, commercial providers.

If all goes according to plan, other in-space platforms for humans will soon join ISS. The station still has a considerable amount of time left (it’s been officially approved to operate through December 2024, and an extension to the end of 2028 seems likely). In the meantime, several other projects are poised to fill in its place.

For example, Houston-based company Axiom Space plans to use the ISS as a jumping-off point for its own station in low-Earth orbit. Axiom aims to start launching new commercial modules to the ISS in 2024, to provide more living and research space for astronauts aboard the orbiting lab. And, after the ISS is retired, Axiom said:

Axiom Station will complete construction and detach to operate into the future as a free-flying complex for living and working in space, marking humankind’s next stage of low-Earth orbit settlement.

Axiom will also provide other services, including purchasing tourist flights to the ISS aboard SpaceX Crew Dragon capsules. The company has already signed a contract with SpaceX to this effect, and the first of those private missions is expected to launch late next year.

California-based Orion Span has plans for its own station in low-Earth orbit, called Aurora. The startup says Aurora could launch in late 2021 and begin accommodating customers the following year.

There are also plans from foreign government for future space stations. Within the next year or so, China has said it will begin building a low-Earth orbit outpost that’s roughly the size of the Soviet-Russian station Mir (which was intentionally de-orbited in March 2001). China has already made considerable strides in this direction. For example, since 2011, China has launched two prototype habitat modules to orbit and sent astronauts to both of them, along with a robotic resupply ship to the second module. India also wants its own low-Earth orbit outpost and is working to launch its first crewed mission to orbit in 2022, the 75th anniversary of Indian independence from the United Kingdom.

Humankind as whole, however, has plans to push beyond low-Earth orbit in the coming years as well. NASA plans to start building a small moon-orbiting space station called Gateway as part of its ambitious Artemis program of crewed lunar exploration. Gateway’s core – a habitat module and a power and propulsion element – are scheduled to launch together in late 2023, and a few other pieces will likely join the outpost later.

Gateway will serve as a staging point for crewed and uncrewed excursions to the lunar surface, NASA officials have said. 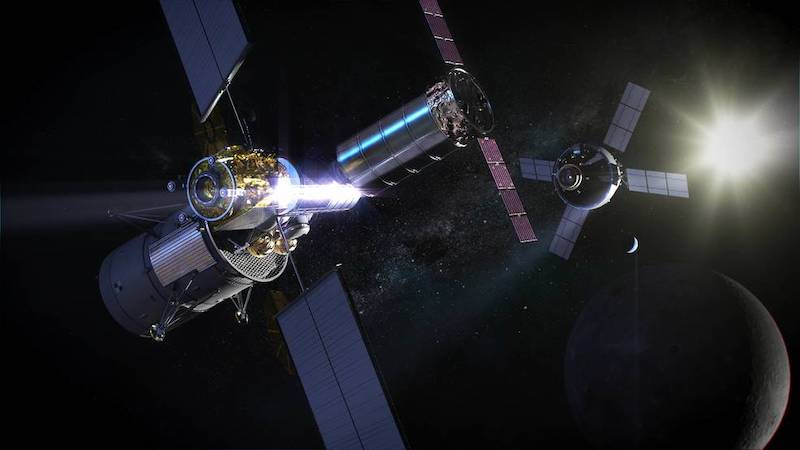 Artist’s concept of the logistics module docked to Gateway in lunar orbit. Image via NASA.

The Artemis program aims to put two astronauts down near the moon’s south pole in 2024 (a landing that will likely not make use of Gateway), but NASA wants the program to do much more as well, specifically to establish a long-lasting, sustainable human presence on and around the moon by 2028.

Bottom line: Twenty years ago – on November 2, 2000 – an American astronaut and two Russian cosmonauts became the first humans to step aboard ISS. Since then, ISS has been continuously inhabited for two decades, growing from a small residence to a sprawling collection of laboratory modules, research platforms and crew living quarters. When it’s time for the station to retire (likely in the mid- to late 2020s), several other projects are poised to take its place.

Read more from EarthSky: What astronauts think about life away from Earth