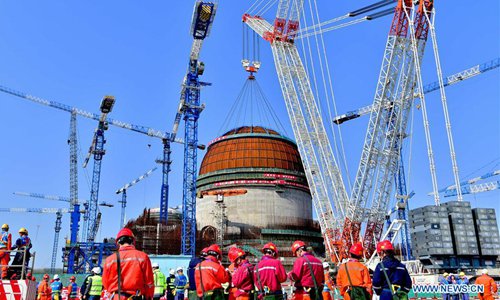 A hemispherical dome is successfully installed for the No. 6 unit of China National Nuclear Corporation’s Fuqing nuclear power plant in southeast China’s Fujian Province, March 21, 2018. In May of 2017, a containment dome was installed on the No. 5 unit of the nuclear power plant, the first reactor featuring the Hualong One design. (Xinhua/Wei Peiquan)

“Our techniques have been demonstrated to be the most advanced in the world by International Atomic Energy Agency (IAEA),” said Gu, who is also a deputy to the National People’s Congress (NPC). Gu said the domestically designed third-generation nuclear reactor Hualong One is a representative of China’s 66-year-nuclear industry development, which had reached a world leading standard.

“CNNC had been reached by more than 40 countries to discuss the new nuclear power generator, related techniques and industry chain,” said Gu. CNNC had exported seven nuclear reactor sets in three decades, according to Gu.

“Nuclear power will be used in more areas such as space and deep sea,” added Gu. He believed that nuclear power can support space travel and deep sea resource exploitation. “By the middle of the 21 century, humans may stay in space and at great depths underwater for a longer period utilizing nuclear power,” said Gu.

Since China’s first nuclear power plant was built in 1985 until now, the country has been incident free, said Gu. “China’s nuclear power plant can provide energy in many circumstances, whose efficiency and safety have reached a high level,” said Gu.

In the future, CNNC will enhance to publish an atomic energy development law, which will be significant for the development and export of China’s nuclear technology, said Gu.

Jeff Bezos’ space flight: Here’s everything you need to know

Space news: US, UAE and China head for Mars this month in battle for galactic supremacy | Science | News

At long last, Parcel 5 to become a green space