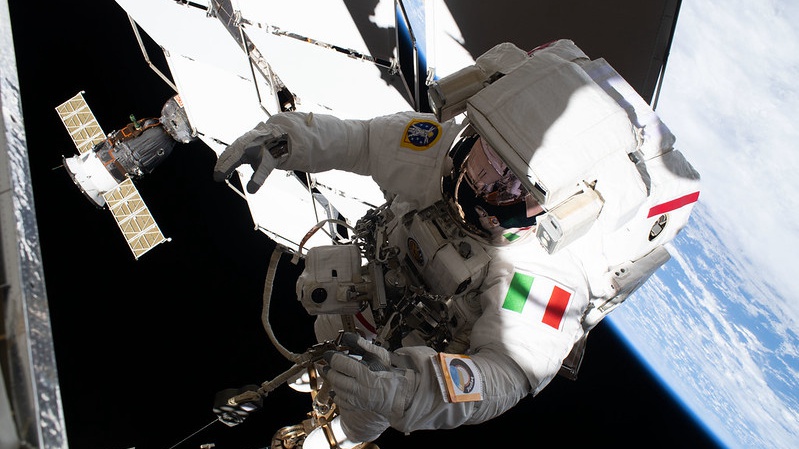 The last time the European Space Agency (ESA) recruited astronauts was 13 years ago. Now it is launching a new drive, and among others, it is seeking more women and people with disabilities.

“We believe it’s time to assess the feasibility of sending astronauts with physical disabilities into space,” ESA director-general Jan Woerner said during a virtual media event announcing the move.

“Right now we’re at step zero: the door is closed to such people. We want to change that,” added David Parker, ESA’s director of human and robotic exploration. “We already have people working at ESA who have disabilities, and we need more of them to join us.”

The list of criteria to qualify to become an astronaut is notoriously long.

ESA’s current recruitment drive requires applicants to have a master’s degree or higher in areas like natural sciences, engineering, mathematics and medicine; they must be citizens of ESA member or partner states; speak English as well as a second language; show “strong motivation” and be calm under pressure.

But the physical requirements of the job have long kept those with disabilities out of the pool of successful applicants, something that the ESA is trying to rethink.

For now, the agency is still conducting a “parastronaut feasibility project,” which will study the conditions needed for persons with physical disabilities to work and live in space – a “global first” according to the ESA.

“But in a few years’ time and not too far after the new group of astronauts are flying, we need to make this happen,” Parker said about the ESA’s goal of sending people with disabilities on space missions.

‘It’s about ability, not disability’

Candidates with three types of disabilities can apply for the feasibility project, including people with a lower limb deficiency, preferably below the knee, people of short stature under 1.3 m, and those with a pronounced leg length difference.

Beyond that, they will need to fulfill the same criteria as other applicants regarding qualifications and experience, and go through the same lengthy selection process, which involves psychological tests, medical checks and interviews. 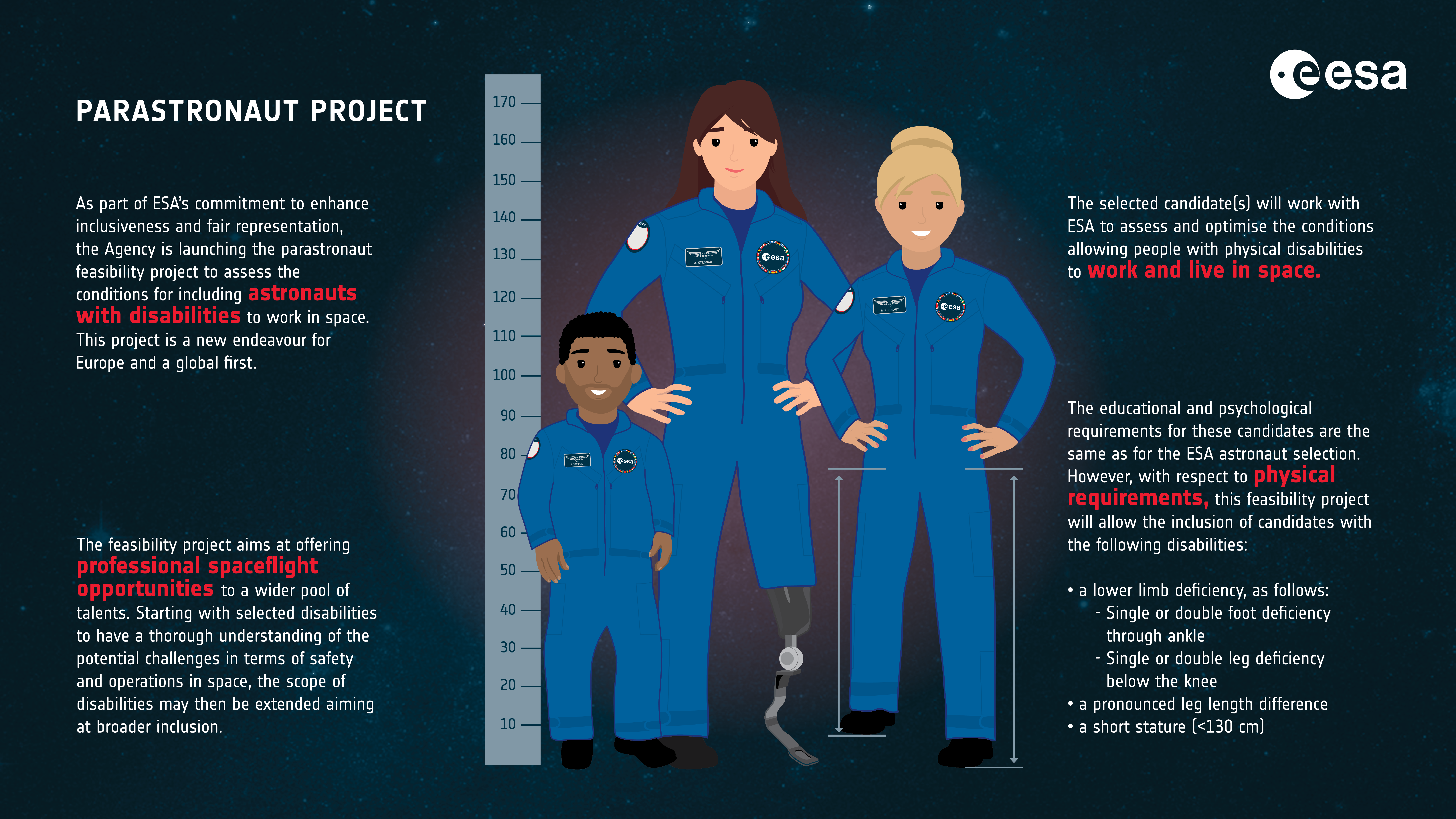 The ESA developed its criteria based on consultations with experts, including the International Paralympic Committee.

“We hope to push the envelope on the topic of disability at work,” said Parker.

There are still many questions “most of which we do not have answers for yet,” he noted. “Nevertheless we think that if we don’t ask the questions we’ll not find the answers and this is the very essence of exploration.”

UK astronaut Tim Peake, who spent six months on the International Space Station (ISS) in 2015-2016, noted that “it’s the right time to be asking those probing questions.”

“There are many many things that you can achieve without necessarily utilizing your lower limbs, for example on board the space station in weightlessness… it’s about ability, it’s not about disability.”

“When it comes to space travel, we are all disabled. We all have a disability because we were just not meant to be up there,” added Italian astronaut Samantha Cristoforetti, the only woman in the ESA’s current class of astronauts.

“What brings us from being disabled to go to space to being able to go to space is technology. So in the end it’s just a matter of ‘do we want to invest in the technology, in the necessary adaptation of space hardware that makes it possible for people who are otherwise fully qualified to be astronauts (to go to space)’.”

As part of its diversity drive, the ESA is also looking for more women to travel to space.

“In the new search, 2021-2022, we would really particularly encourage women to apply,” said Woerner.

Since 1961, 575 astronauts have traveled to space. Of those, only 64 were women, according to Claudie Haignere, the ESA’s first female astronaut and now an adviser to its director-general.

And yet, they have held every post, from crew member to space shuttle pilot and ISS commander, proving they are up to the task, she said. 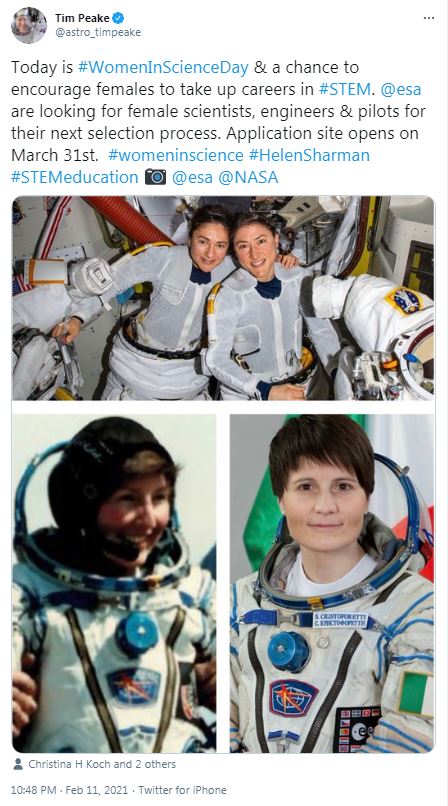 The Soviet Union already trained female astronauts in the 1960s and Valentina Tereshkova was the first woman to travel to space in 1963, two years after the first man, her compatriot Yuri Gagarin.

Two decades later, Sally Ride was the first U.S. woman in space, and since then the likes of Liu Yang and Wang Yaping of China, and female colleagues from Canada, the UK, Japan, South Korea and even Iran have joined their ranks.

Still, during the ESA’s last astronaut recruitment drive in 2008, less than 16 percent of the 8,400 applicants were women. And Cristoforetti was the only one who remained after the rigorous selection process, alongside five male colleagues.

Throughout the agency, there has been improvement since then, with close to 40 percent of new hires in the last few years being women, according to Ersilia Vaudo Scarpetta, chief diversity officer for ESA.

As a result, about a third of the agency’s workforce is now female, she said.

To attract more female candidates, less emphasis has been placed this time on pilot and military experience, and there has been more of a push to get the word out about the recruitment drive.

“We all hope that with more visibility… we will little by little achieve a more balanced diversity within the astronaut corps,” said Haignere.

In all, the ESA is looking for four to six people to join its main corps of astronauts – full-time staff who will conduct long-duration missions and high-visibility tasks – and 20 people to join a reserve pool for one-off or limited missions.

The agency will start accepting applications on March 31 until May 28, with this new class of astronauts expected to be flying by 2024 or 2025. 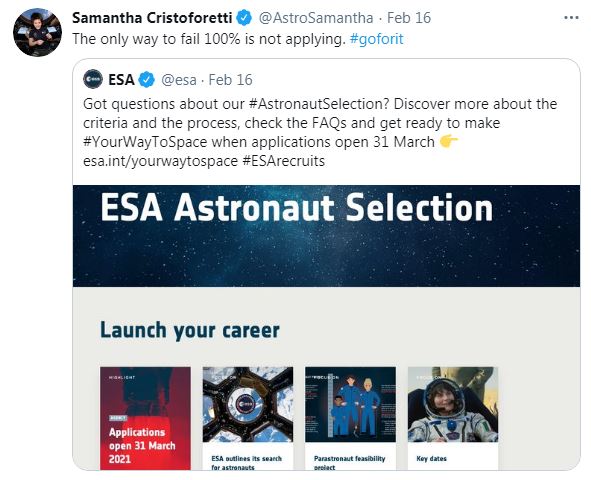 The most breathtaking space pictures of 2021 so far include a black hole, the “Lost Galaxy” and Jupiter’s jet streams.

What Is the Space Force’s Technology Vision?